Jennifer Chamandi: The Woman Behind The Brand You Need To Know | The Lifestyle Edit
Display 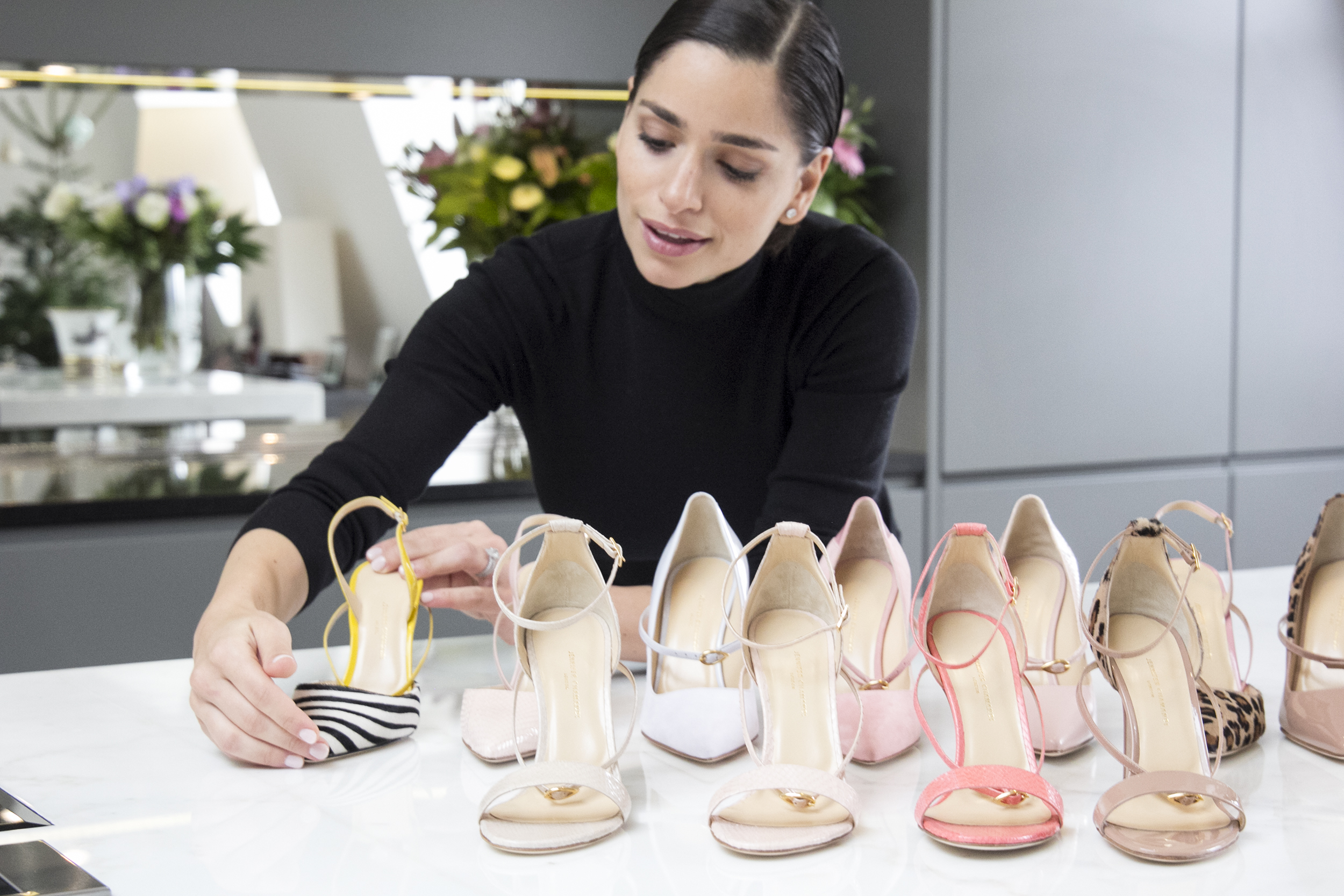 Designer Jennifer Chamandi on leaving finance for fashion and why her partnership with Browns was a game changer. 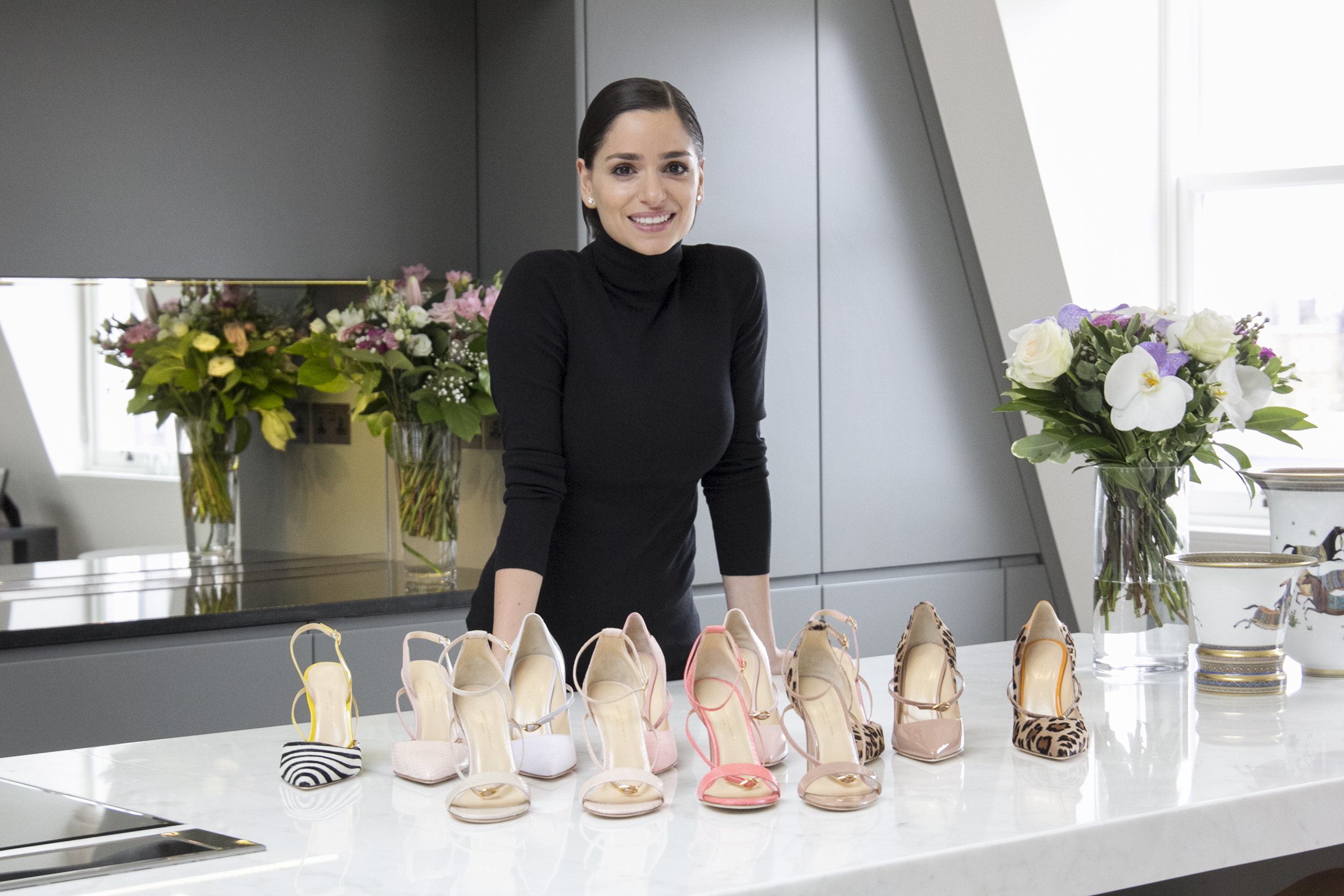 With so many brands vying for attention and adding to noise, it’s easy to thing that we’ve seen it all, especially in a space as saturated as footwear. But that’s where Jennifer Chamandi comes in. After seven years working in finance, she’s created a collection of beautiful shoes with a signature eye of the needle design that you’d be able to spot a mile off. And before you dismiss her off as ex-financier trying to making in fashion, this isn’t a vanity project, nor is it a midlife crisis. While holding down her full-time gig, she dedicated her weekends to learning to intricacies of footwear design, and when her dream factory in Italy refused to see her, she hired an Italian teacher, learnt every day and flew to Italy four months later, presenting her business plan in fluent Italian. Oh, and did we mention she was heavily pregnant in the lead up to launching the line with Browns last year? Yep, she delivered days after her debut collection hit the shop floor. Basically, she’s the real deal.

We caught up with her in London home to get a peak of the upcoming spring collection, quiz her on how she managed to make a splash in the industry without any prior experience or contacts and what she’s learnt along the way. 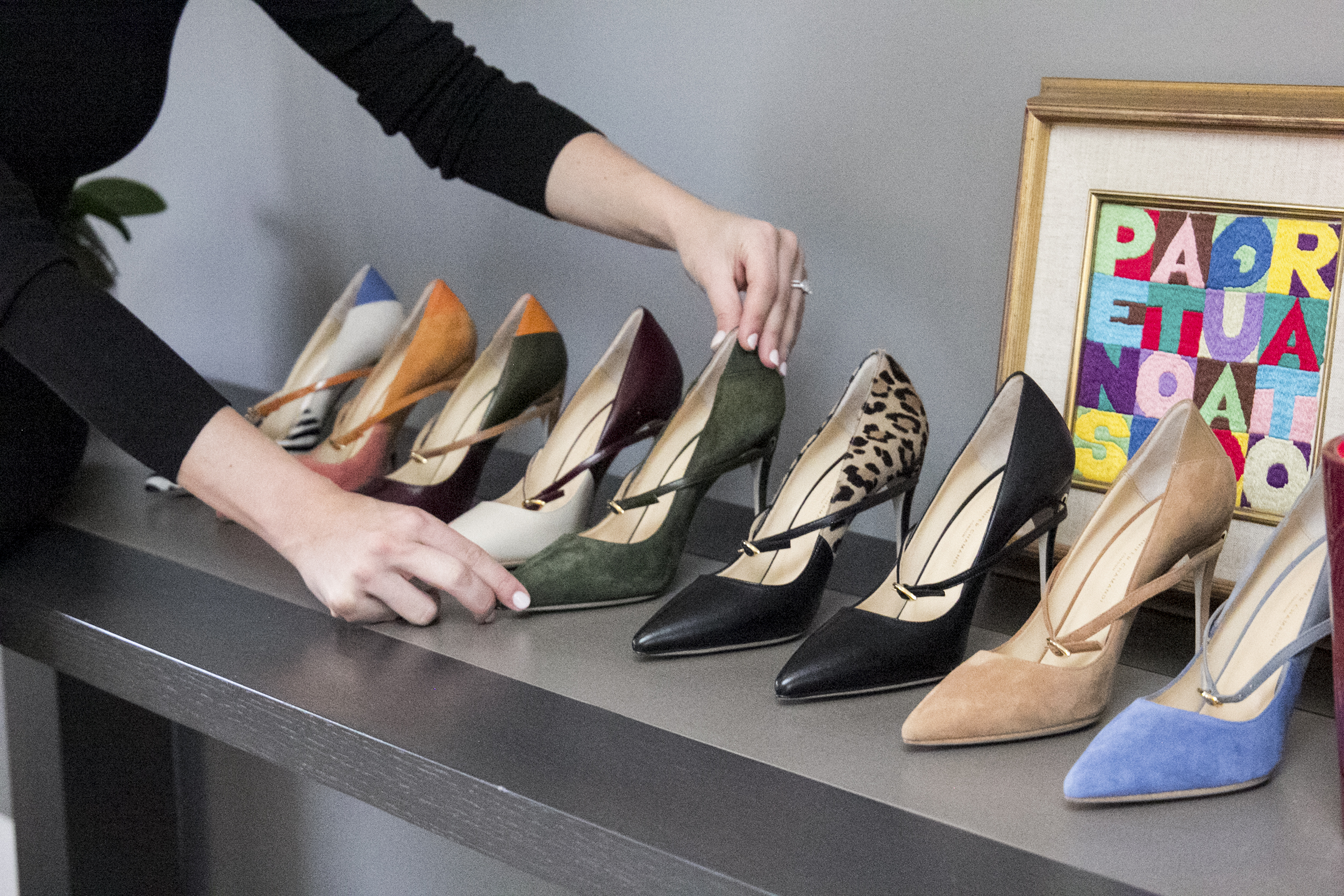 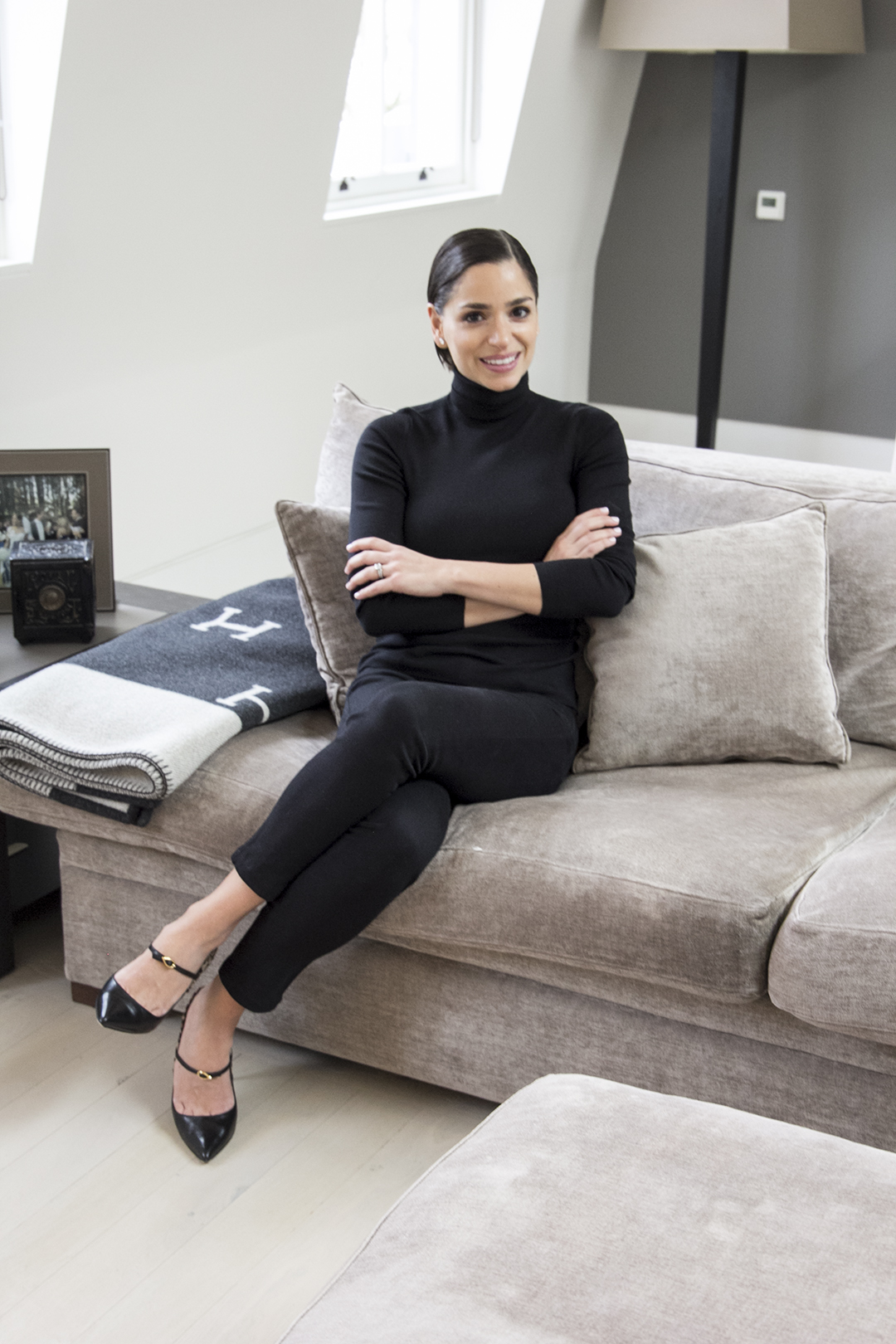 ON STARTING HER CAREER IN FINANCE: I studied economics at the London School of Economics and then went into finance. I was in banking for seven years but I’ve always had a passion for shoes. My dream since I was a child was to have a shoe brand. I always said that one day I’ll do it but obviously having Middle Eastern parents and being top of my class, my life was all about school. They pushed me towards doing something more solid. I’ve always had this kind of duality though. I loved mathematics but I also loved drawing and my creative classes. But I knew that if I wanted to set up a company and manage the business side, I needed to have a solid base so that’s why I went that route. It was the best choice. If I had to do it again, I would follow the same path because studying economics broadened my horizons. My years in banking were just priceless – the people I met and worked with and just all of the responsibilities I was given at a very, very young age. I signed my contract at Merrill Lynch when I was 20. I started there as an intern during my second year or university and then they offered me the job when I graduated. After seven years in the industry, it was difficult to leave but I knew that if I didn’t do it there and then, I would start my family so taking the leap would be more difficult. It felt like it was time.

ON HOW HER FINANCE BACKGROUND HELPED IN SETTING UP THE BRAND: Often when you’re just on the creative side, it’s easy to operate in your own bubble. You’ve got all these ideas bursting that you just want to put out there that you’re in a trance. When I created this launch collection, I was looking at all of the leather samples and skins and thinking about all the costs involved. When you’re operating purely on the creative side, you tend to forget about costs. You just want to create something beautiful, regardless of what that ends up costing the customer. My experience helps me keep my feet on the ground. I’m constantly asking myself what will sell. I do my own budgeting and cost projections and I make quick decisions. You can be in the sampling stage forever and spend a lot of money. You can look at 10 different shades of pink before you find the right one but you have to make a call and choose so you can spend the rest of your budget on marketing and other aspects of the business.

ON LEARNING THE TECHNICAL SIDE OF SHOE MAKING: I didn’t leave banking and go straight into starting my line. I studied a course at Cordwainers. They’re one of the most renowned schools and I had an amazing teacher. He would shout at us for doing a strap that’s one millimetre out and would make us do it again. It made me confident that I now had the creative and technical, as well as the business side down. I used to go in on Saturdays and Sundays from ten to four. Yes, I didn’t have time to go for brunch with my girlfriends or get my nails done but I made an effort to be organised and utilise my time after 4pm. I’ve learned that it’s okay for some of those luxuries to fall by the wayside when you’re investing in yourself. I strive to become an expert in anything I do because I want to do them well.

WHY SHE DECIDED TO PATENT HER SIGNATURE STYLE: The eye of the needle is my signature style and I wanted to protect it. Now the application has been submitted, it can take up to two years to go through. I also trademarked the name and the logo. Patents are extremely difficult to get but I have my fingers crossed. Just having the application in makes a difference but it costs a lot. Being able to accurately budget for this and analyse whether the investment made sense is all down to my finance background. I wouldn’t know about these things otherwise. 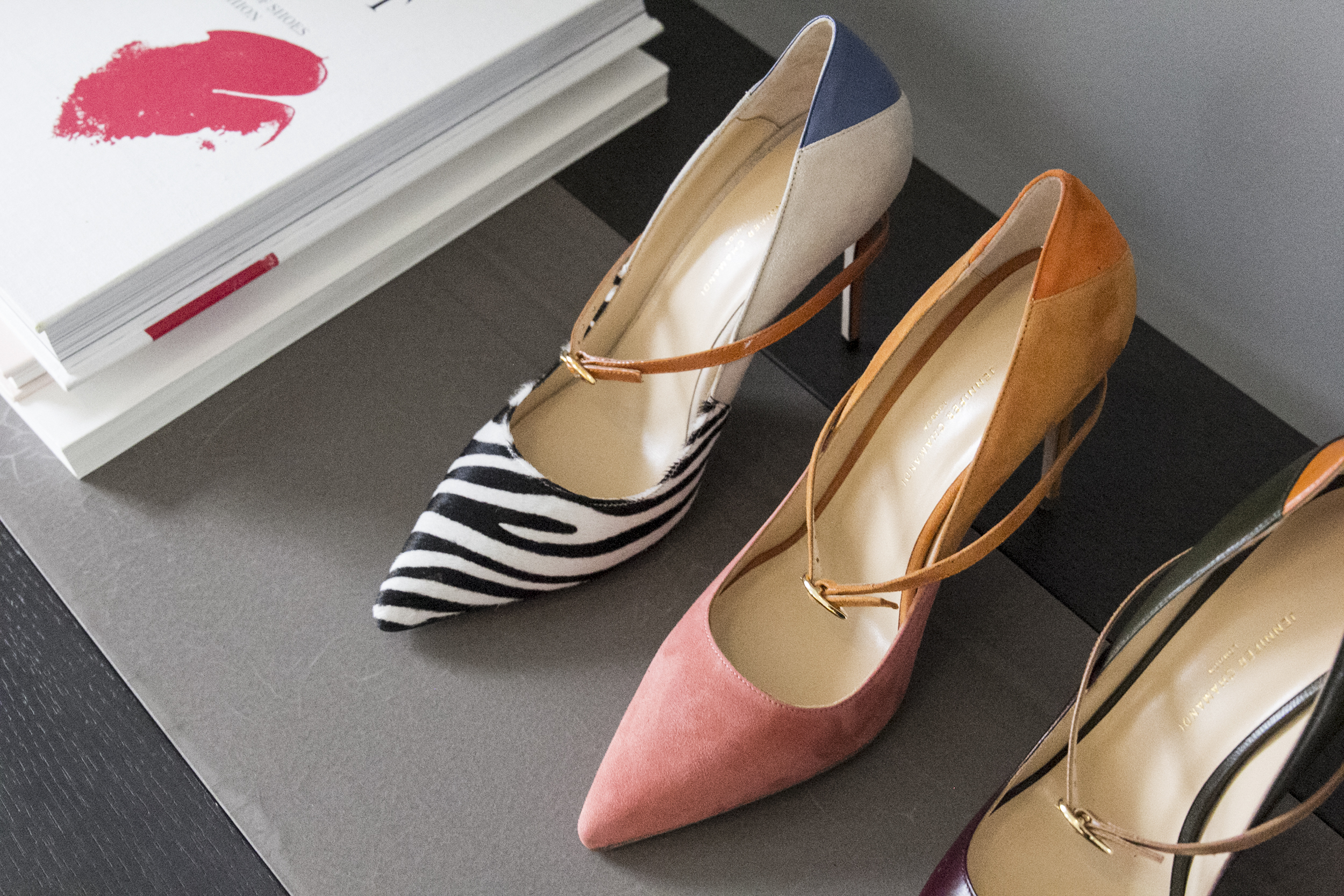 ON LEARNING ITALIAN IN FOUR MONTHS TO BOOK A TOP END SUPPLIER: I knew I wanted my shoes to be produced in Italy. I found a factory in the outskirts of Milan. It’s the same factory that makes Christian Louboutins and Manolo Blahniks. They all speak Italian and Italian only. They will not speak English; they will not speak French. So I learnt Italian. I did a four-month intensive program in Italian. Every day I had my teacher come over and we went through everything. It was such an important thing for me to do because finding the right factory is the hardest thing. People obviously don’t want to share their contacts and I respect that. So I did a lot of research on manufacturers and eventually I found them and now they’re like family to me. Initially the owner said he was too busy to see me but I was quite persistent and said that I had a concept that he should listen to. Initially he thought I was just another person having a midlife crisis wanting to go into fashion. I started learning Italian in the January and went to see him in the April. He gave me half an hour and I presented my business plan to him in Italian. The reason I’m telling this story is that I showed him how committed I was. Creating my shoes was a huge challenge for him because I wanted to put a hole in the heel. The heel is the main pillar of the shoe so it’s not straight forward. It took us nine months to prototype.

WHY SHE DECIDED NOT TO WORK FOR ANOTHER BRAND FIRST: You learn so much working for a brand and making mistakes then. The moment you have your own business, you have to pay for your mistakes and it’s not just financially, it’s emotionally and relationship-wise too. I just felt that I’d already done seven years in finance, I was 28 when I started working on the brand and I just turned 30 this year and started a family. If I started working for another company, it would have just delayed everything even more. And, more than anything else, I just felt ready. I mean, I was very lucky to be supported by my husband and my family, too. I remember my mum gave me a card that I still I have in my room. It was had an image of a little guy taking a plunge and the words, ‘go for it, you can do it.’ Having that support was so important for me. It can get very lonely making decision on my own. ‘Am I doing the right thing?’ You question that a lot. Then there’s pressure because you’ve invested a lot and want to use it wisely and efficiently. 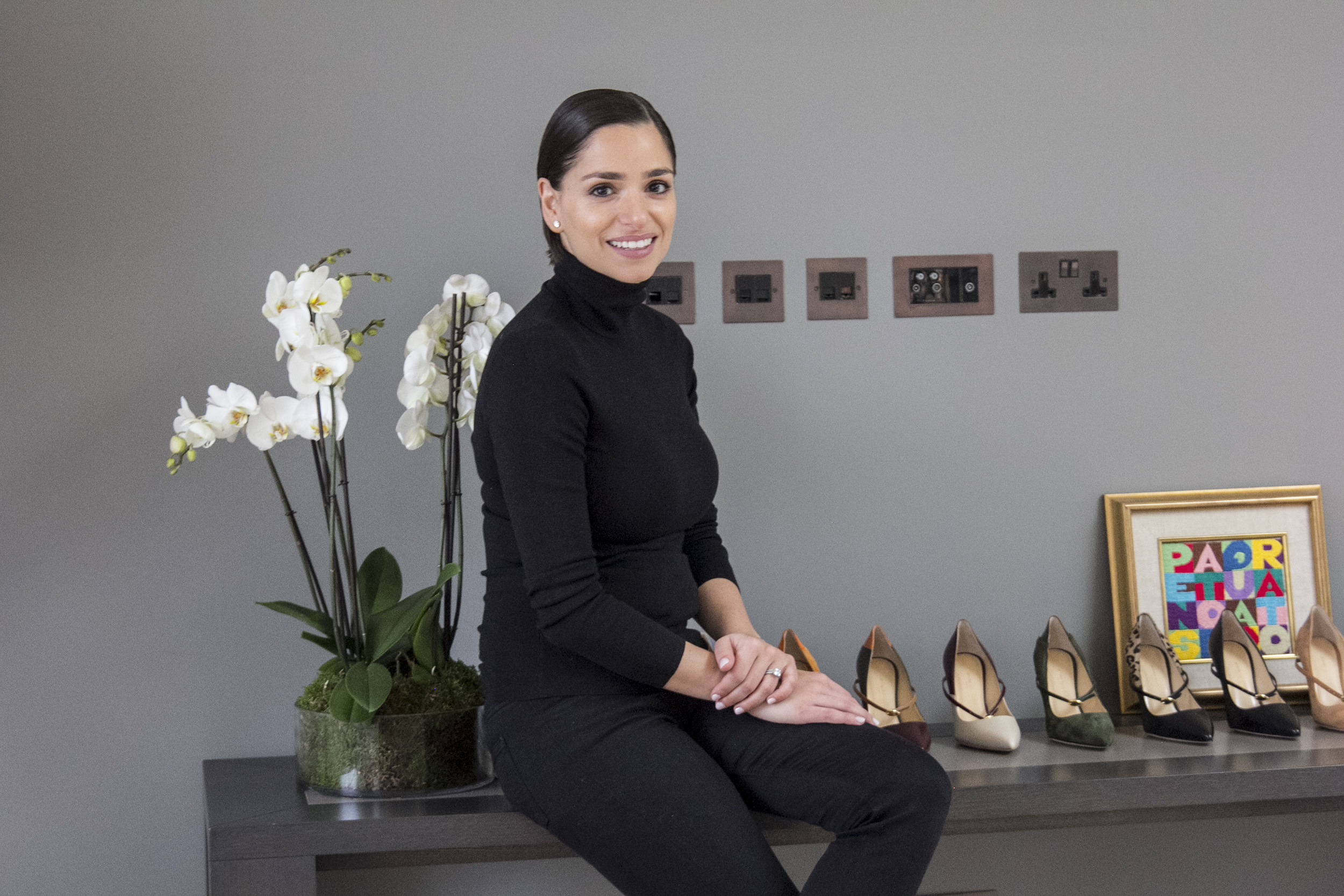 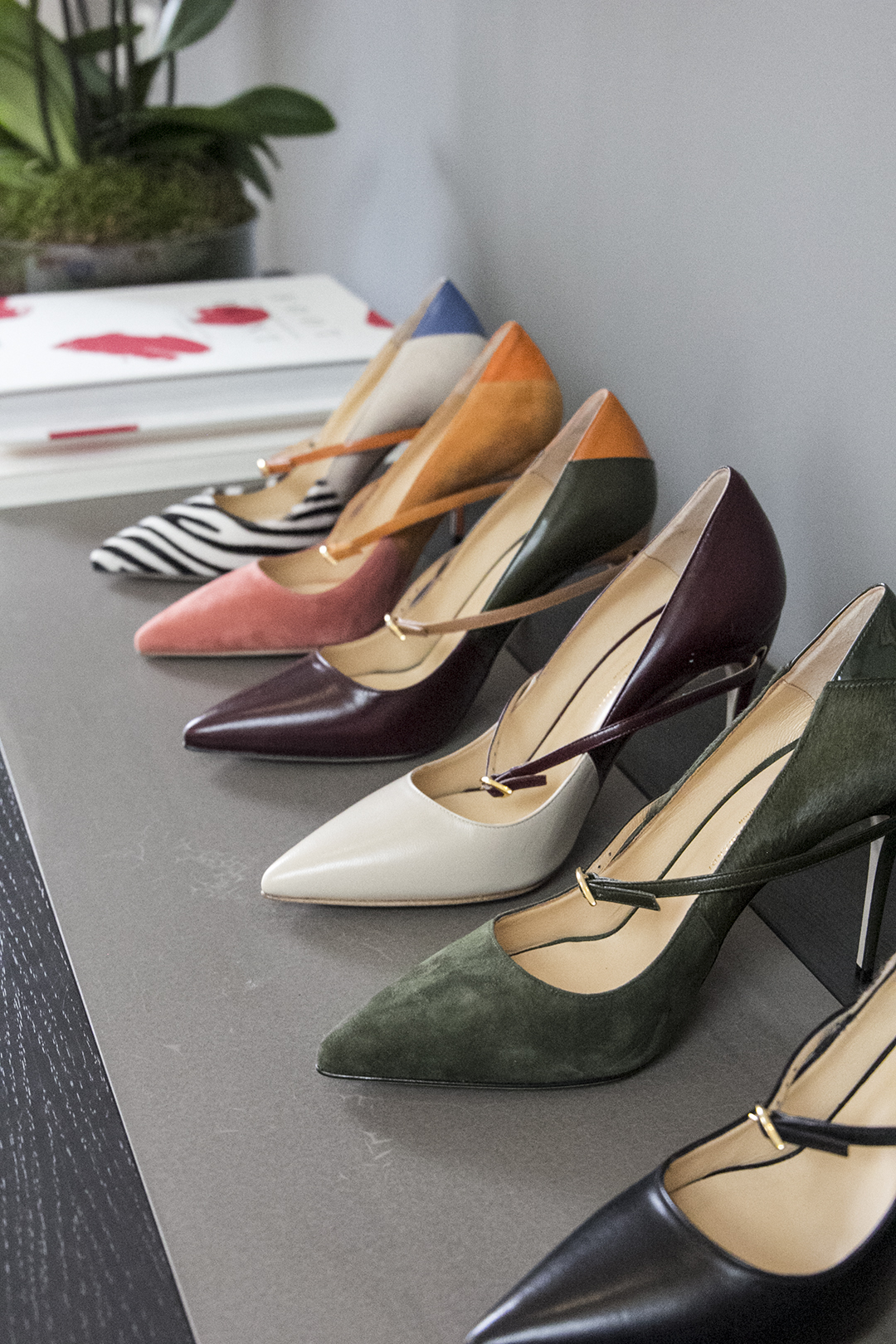 THE OPPORTUNITIES AND CHALLENGES SHE FACED GETTING THE BUSINESS OFF THE GROUND: I was a nobody before launching. No one in the fashion industry knew me. I don’t come from a fashion family. There were no family introductions. It’s so difficult to get a foot in the door with press if you don’t have a connection. The opportunity was based on the fact that I knew my product was different. I have a signature. I didn’t just want to launch any shoe. The market is so competitive. There are so many beautiful designs out there so I knew I needed a point of differentiation. I wanted to create something as distinctive as the Louboutin. I admire him hugely, and I wanted the next red sole. Partnering with Browns to launch my collection was so big for me and I’m ever so grateful for them believing in me from the beginning. It gave me a head start with press and also with consumers because the Browns clientele is very specific and trust what the buyers present them. It really helped with the challenge of building my credibility. I’m very organised but I’ve learnt that there are so many challenges that are out of my control. I was seven months pregnant before we launched and the shoes were shipped just a few days before the launch event. Things happen unexpectedly and you just have to work around them.

ON WORKING WITH BROWNS: I was so lucky to be introduced to [Browns CEO], Holli Rogers, who I absolutely admire. I think she’s wonderful and has a great eye. When I had my first meeting with them, the final prototypes were not ready. They loved the concept but obviously said that they needed to see the collection of samples. I was pushing my manufacturer because I had the collection sketched and ready – but obviously, they were not prioritising my small collection of samples so there was only so much I could do. I finally got them in April, which was already out of the buying season but they ended up loving the collection. After a few meetings, they decided to launch me. They’re the perfect partner because they’ve always nurtured new design talent. Alexander McQueen is the greatest example. Getting into Browns felt like I was reaping the fruits of all my hard work. Seeing my shoes on the shop floor, I mean, I have no words. It’s magical. I still get goose bumps. Moments like that makes all the challenges and the difficult things I go through totally worth it.

This interview has been edited and condensed for clarity