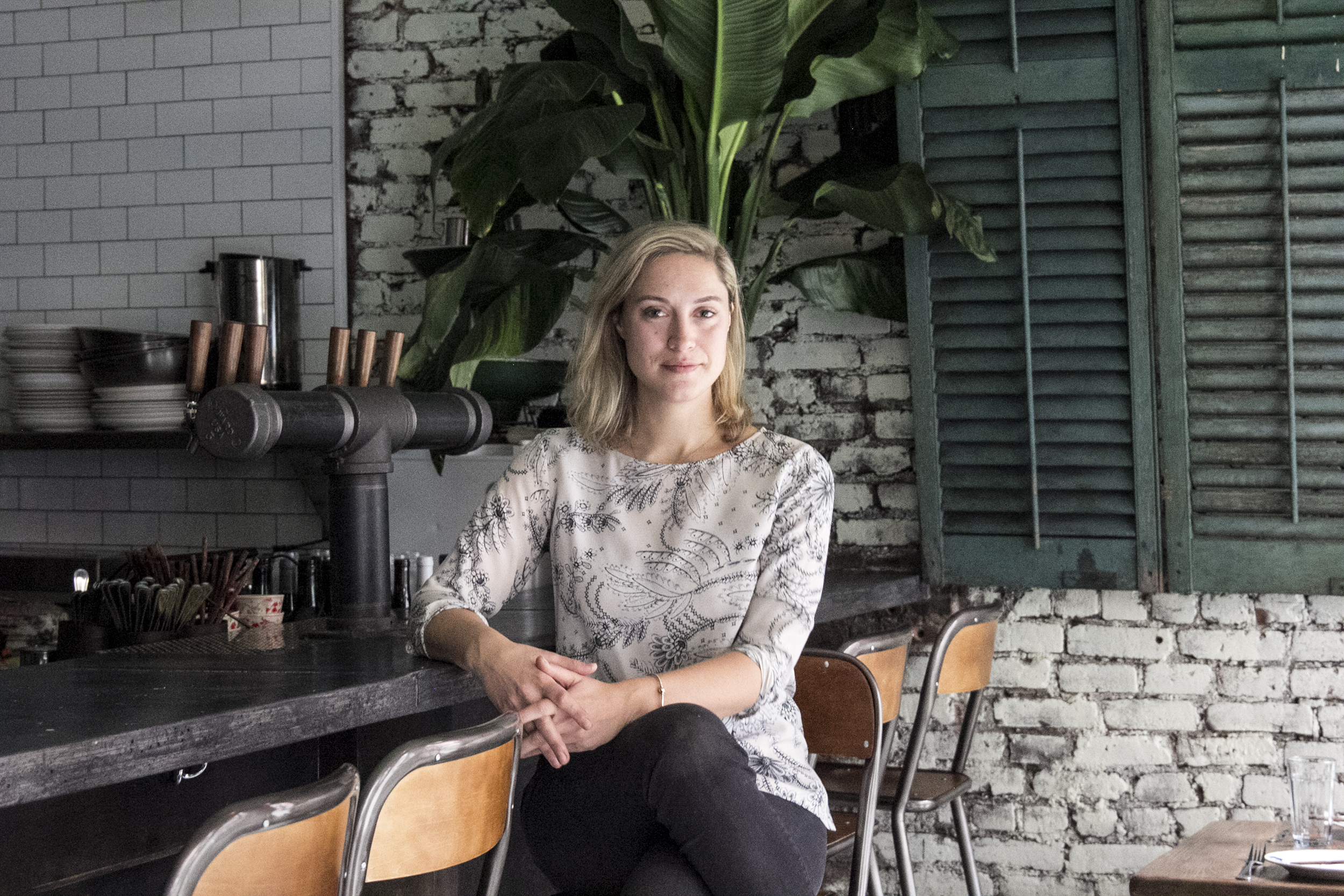 Sara Leveen just opened her own restaurant and it’s just as good as everyone thought it would be. 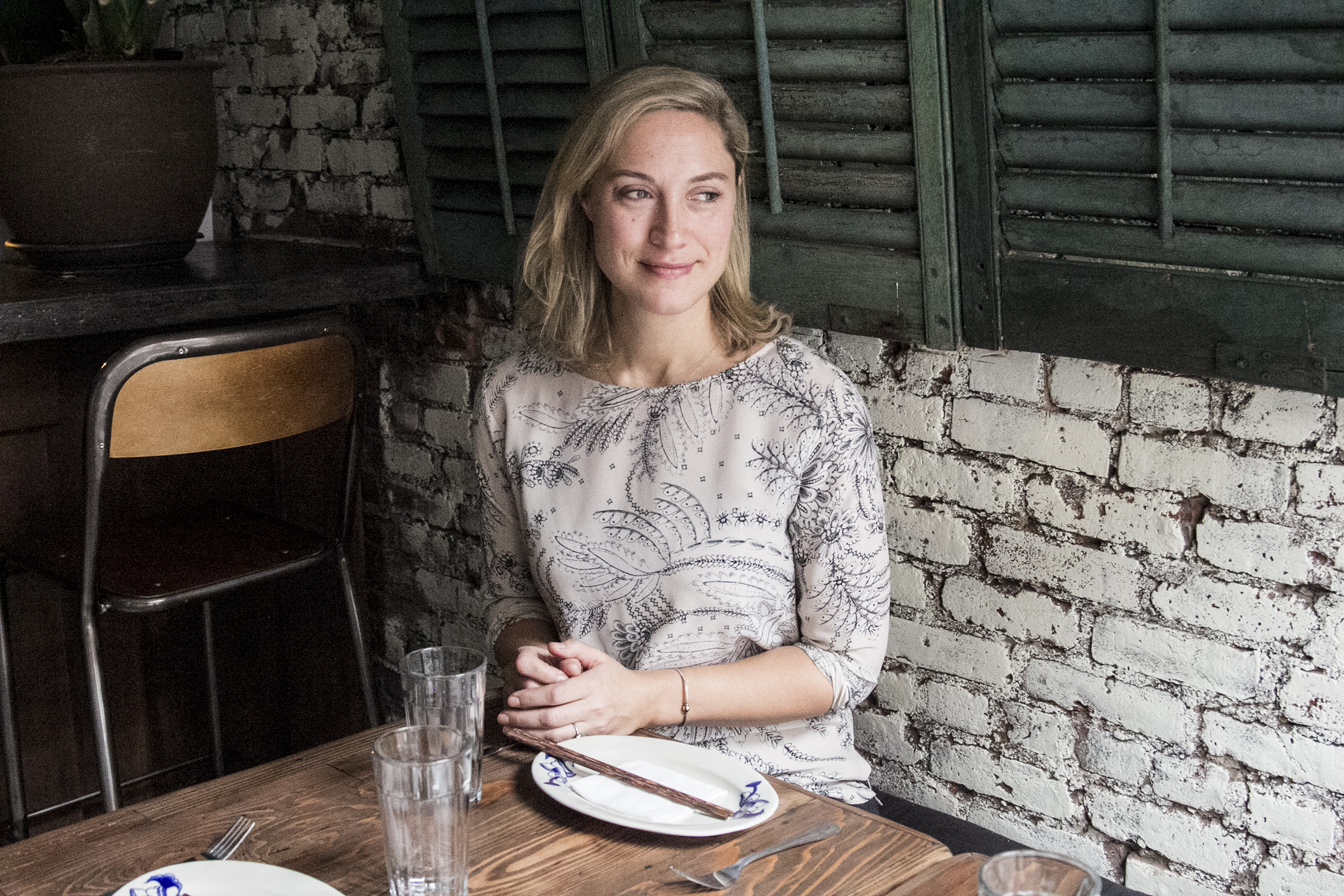 It’s 7.45pm on a Tuesday night and I’m sitting at the bar at Hanoi House with the restaurant’s co-founder Sara Leveen waiting to be taken to my table. The place is heaving. I spot top restaurateur Stephen Starr in one corner of the room and a table of people taking photos of their dishes in another. By the size of the queue forming outside, you’d think the restaurant was a mainstay on the East Village foodie scene but, no. It’s the second day since Sara and fiancée, Ben Lowell opened the doors to their brainchild.

The restaurant pushes the envelope on what you’d expect from Southern Vietnamese food. Yes, the classics are there, but the menu boasts so much more. Less than two months in, it’s already been awarded Best Vietnamese Restaurant in New York Magazine’s Best Of issue but what you don’t see is how she’s earned every bit of it – how she walked away from working at one of the most prestigious restaurant groups in the country and ploughed her life’s savings into following her dream of opening a restaurant of her own. We hear so much about the creative side of opening a restaurant so when we caught up, we spoke about what the very real financial responsibilities that come with opening up shop and how she made sure that she was creating a real viable business against the backdrop of an uber competitive food scene in New York. Let’s just say she knows what she’s talking about… 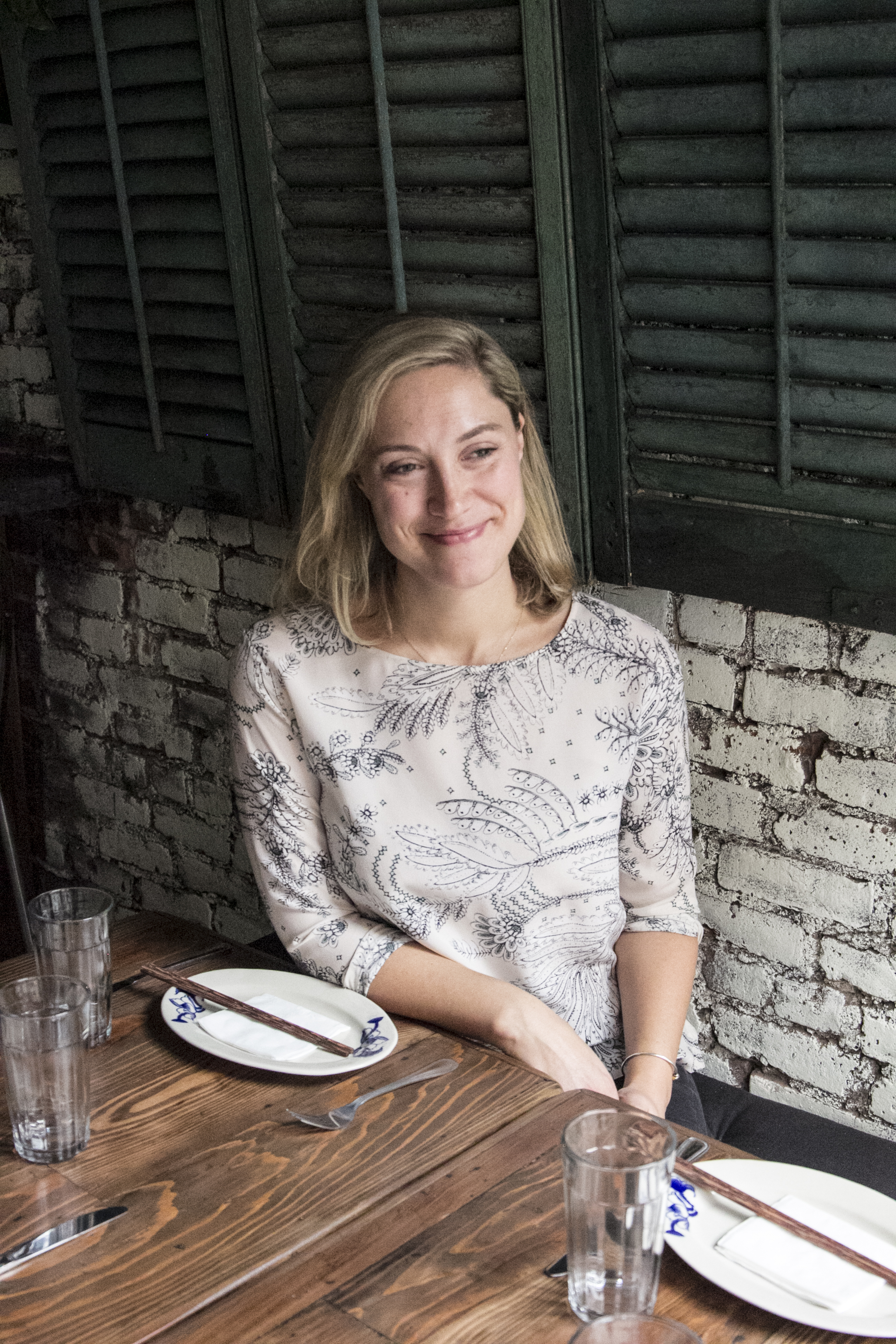 ON HOW HER 15-YEAR TENURE IN THE STARR GROUP WAS LIKE GETTING AN MBA: I started as a host, runner and server at the original Starr restaurant at the Continental in Philadelphia. After about three months, Stephen approached me to manage Buddakan.  At first I was overwhelmed by how busy it was and wasn’t sure exactly what my role was but the more I moved around and engaged staff and guests, the more I understood my purpose. Within a few months of managing I knew I had found the perfect role.  I was very lucky to work for a General Manager at Buddakan who gave me many opportunities to learn how things work across the board. I then relocated to New York to open Morimoto and Buddakan. I hired and trained the runners and bussers for both restaurants.  I then was the Assistant General Manager and at Morimoto NY before becoming the General Manager at Buddakan NY. That was the ultimate role. At 30 I became the leader of the highest grossing dinner-only restaurant in the country.  In New York, I was led by Steve Scott, who is my mentor to this day. After two years at Buddakan I decided that I needed to expand my experience so transitioned into a restaurant development role, which involved planning and opening restaurants for the group. I was able to translate the company culture to new teams and concepts and oversee menu and concept development, financial planning and hiring and training.  It was the next logical step within Starr based on my experience there.  I could have been a multi-store director in Philadelphia but the main thing that was missing for me was the creative development and the new role satisfied that.  It was also nice to have the unknown of a new restaurant on a daily basis.  Building something from scratch is exhilarating! Throughout my time at Starr, I learnt that it’s all about the guest. Make them comfortable; be truly grateful that they are choosing you and really listen to them. Hire good people who will naturally understand this vision. Take care of your staff, look after their needs and help promote a good quality of life for them. Doing those things will always create an incredible guest experience.

THE REAL REASON SHE STAYED AT STARR FOR SO LONG: There are a few things about Starr that kept me there for so long but they most relate to Stephen himself and our working relationship.  I was fortunate to be in the inner circle, which ultimately meant I had an active role in growing the company. To him I represented positivity and warm hospitality, which are needed in endless supply. In the final three or four years, he grew to trust my palate and my instincts for whether concepts, locations and menu items were viable. And he’s a genius. You don’t get many chances to work so closely with that level of creativity and relentlessness.

THE POWER OF LEARNING IN SOMEONE ELSE’S BUSINESS: I can’t imagine any other way to launch a business.  I joke that I have a PhD in restaurant management and development but that still doesn’t totally prepare you for the weight of being directly responsible for each employee, each guest and each investor or partner. I don’t think anyone without serious experience in the restaurant business could do it without major headaches and setbacks. It’s a difficult and unglamorous field from the inside!

ON HER PATH TO ENTREPRENEURSHIP: I knew I would have my own business some day. The process itself began in 2013 when my boyfriend and I took a trip around the world and were inspired by entrepreneurs of all shapes and sizes in the hospitality and tourism business.  We said to each other “we HAVE to do this”. We love the food, people and overall culture in Vietnam. It struck a chord with us in 2013 when we visited and the more Vietnamese restaurants we ate in New York, the more we wanted to do this. Hanoi House hits the sweet spot; soulful satisfying food that can be very healthy; located on an awesome block in the East Village; and well-priced.  What makes it different is that while nearly every ingredient we use is found in Vietnam, many of the flavour combinations are unique. There are super traditional dishes on the menu.  But we are also serving Octopus, Pig Ears, Sea Urchin and Frog Legs.  I don’t know another Vietnamese restaurant doing that. Our mission was to represent Hanoi and set ourselves apart from the Southern Vietnamese restaurants in New York.  We also wanted to allow Chef John to express himself creatively within our vision. The three months leading up to the restaurant opening were some of the best moments of my life. I had never had that kind of flexibility in New York: working on my own schedule from my home, the restaurant and in coffee shops. I realize that was a major luxury that I was afforded because I had worked hard and saved hard, and my fiancé was still working full time as a waiter. I poured everything into the little details for Hanoi House – antique and thrift shops, supply & design stores, hours spent on menu inspiration.  When pursuing something that you are passionate about, it’s important to take the time to feel and love it along the way.  I was also able to spend time with my family knowing that my time would be fully committed to the restaurant once it opened.  My advice is to take a moment for the things that really matter to you because they may take the back burner for a period of time while you’re launching the business. 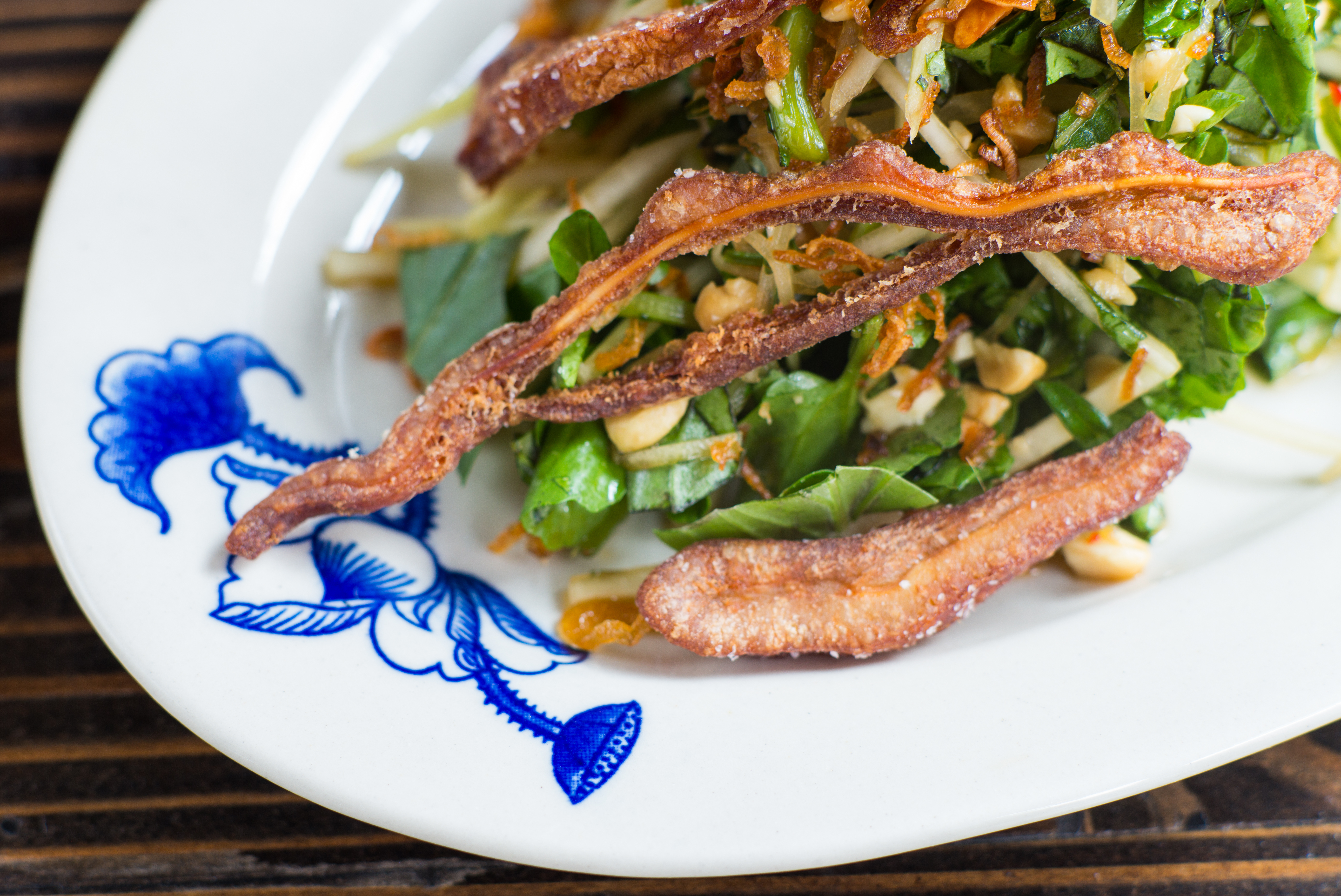 THE CHALLENGES OF GROWING A CUSTOMER BASE IN THE COMPETITIVE NYC FOOD SCENE: When creating ethnic food that can be found in Chinatown for less money, it can be challenging to maintain perceived value.  Some people don’t care about the quality of ingredients or thoughtful preparation that goes into everything we do. Menus prices are a big factor for us.  We charge way less for some dishes than we should just to remain affordable without sacrificing quality. That counts for a lot in the competitive market but it’s challenging to cover all costs this way. We also have guests who focus more on the authenticity of a dish and less on whether it tastes good. 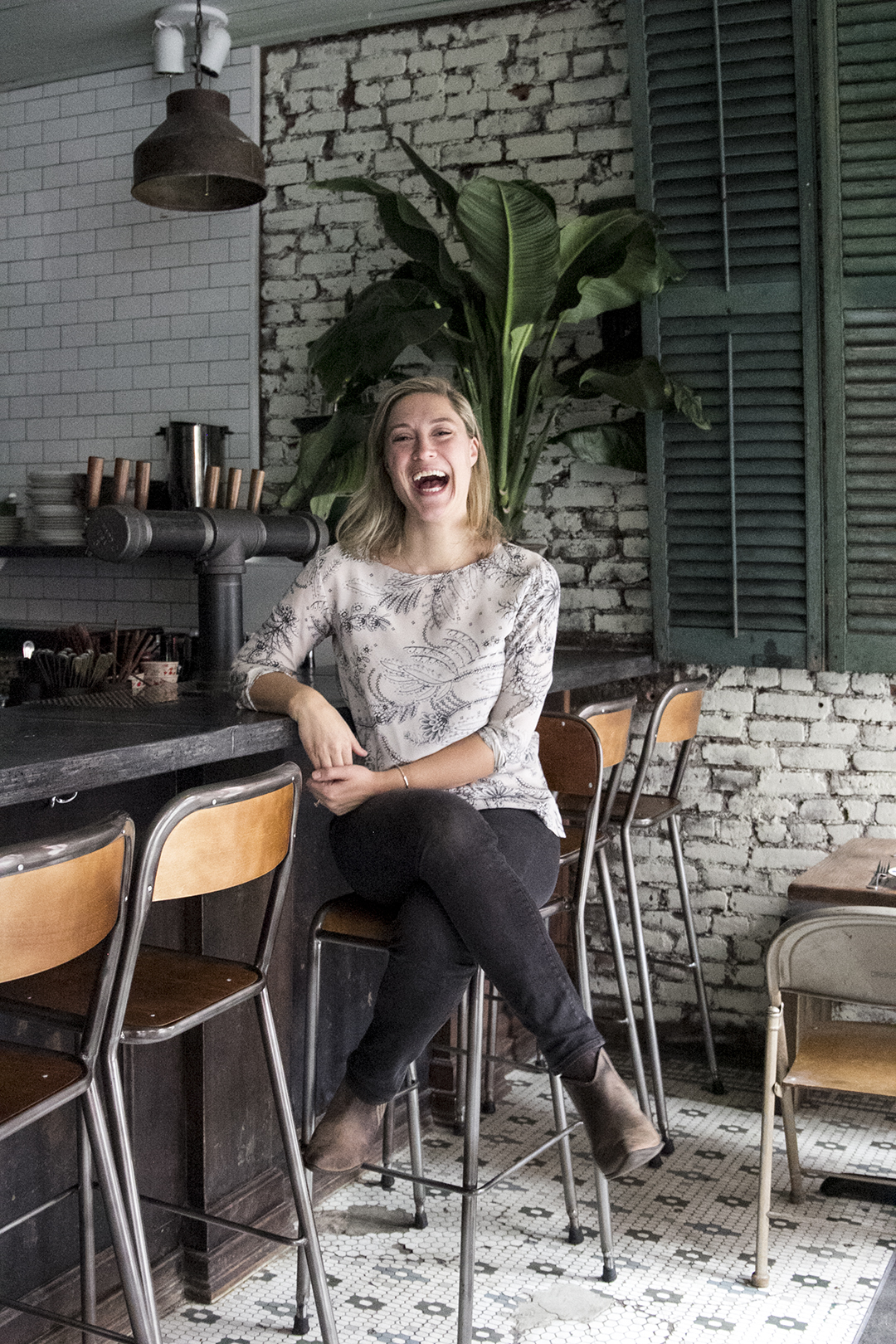 NUMBERS 101: I love this part of it. We took a very empirical and granular approach to restaurant planning.  In order to write a business plan and raise capital, we needed to create a pro forma, which outlines the capital required to open the restaurant and then projections for the first full year of operations as well as annual growth to determine return for investors.  Details such as number of seats, number of turns per seat, check average for food and beverage, staff schedules and service contracts are all calculated to determine how each penny comes and goes and ultimately, the feasibility of the business. Some restaurants will price their menu entirely based on how much each dish costs to produce. That’s makes complete sense and ensures that smart decisions are made regarding product selection and portion size. We took a spiritual approach to pricing the menu in the sense that we recognized our best chance of attracting guests from the onset was to have a fairly priced menu that either meets or beats our competitors. We are definitely charging less for certain items than we should, but we have maintained a sense of value for a majority of our guests and it has helped keep a constant flow of guests coming in the door.  We will always face the challenge of the perception that Vietnamese is supposed to be cheap, because it is in Chinatown.  And Chinatown is only a mile away. But we are offering ingredients that you do not find on many Vietnamese menus in NYC.

THE BIGGEST DIFFERENCE BETWEEN OPENING RESTAURANTS NOW COMPARED TO BEFORE: I had so many great resources at Starr Restaurants. There was always someone accessible who was an expert in their field; HR, Legal, Accounting, Facilities. But as a business owner, I often play all of those roles myself.  It’s thrilling but challenging to make a major decision that impacts the employees, the guests or the investors.  It requires more research and risk. My partners are amazing, though, and we try to make decisions as a group when we can.

ON FOLLOWING YOUR INTUITION: I think we all know when something is the right thing to do.  If we hesitate, it is always for a good reason.  Listening to that voice can make for a great leader.  I actually believe that instincts can be formed. I learned to never take anything for face value.  Stop and double check, dig deeper, ask more questions.

UNFORGETTABLE MOMENTS: There was a moment during our Friends & Family soft opening where I realized that we were leaping from a make-believe restaurant that had been practicing for a few weeks to a full blown, open-to-the-public operation in two days!  The first few weeks when the press started gaining momentum was also surreal.  I read one of our first critic reviews with Ben in the basement and it was very favorable and we were just looking at each other wide-eyed like “I can’t believe this is happening”.