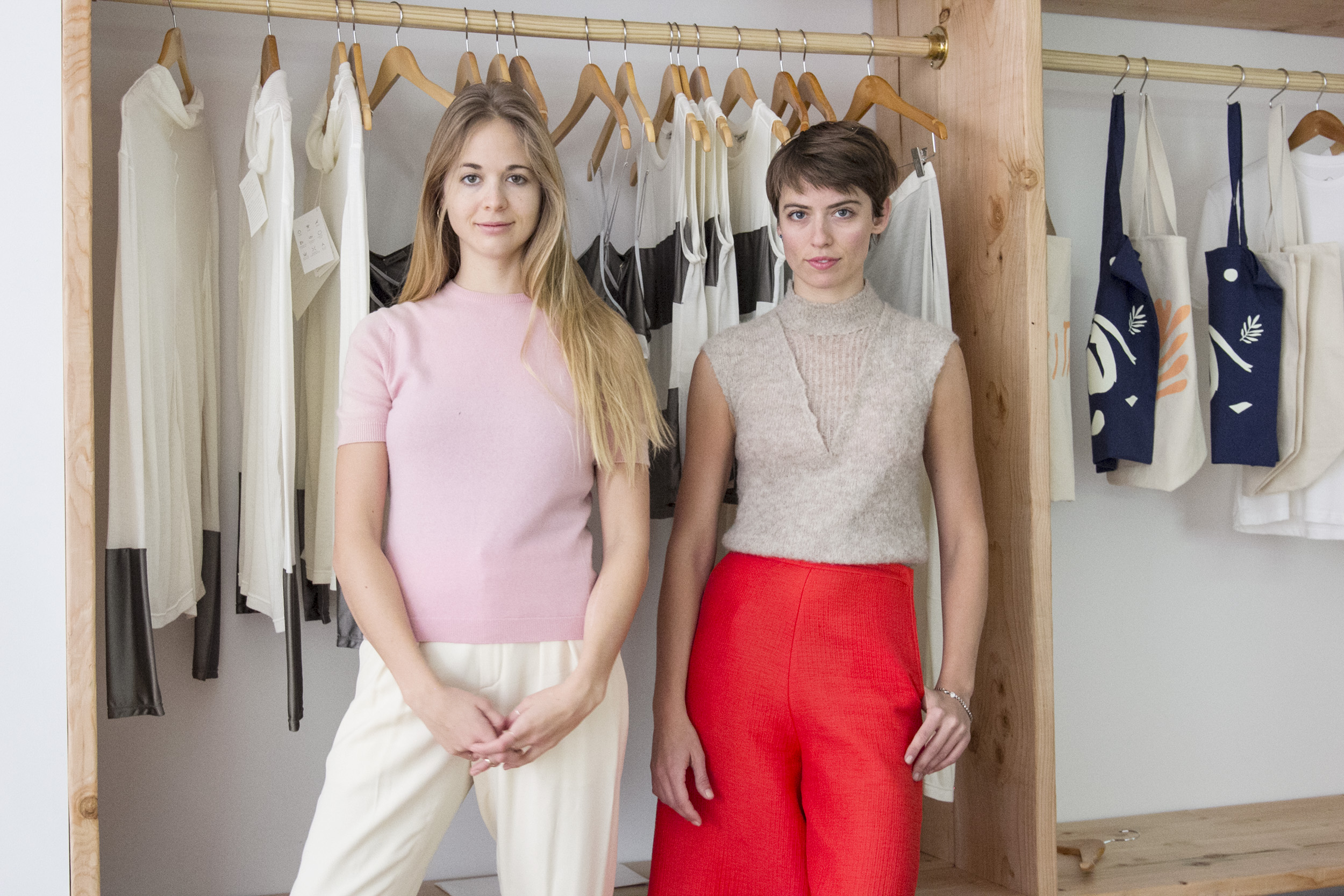 Sky Ting Yoga founders Krissy Jones and Chloe Kernaghan on yoga as a lifestyle and movement as a way of life. 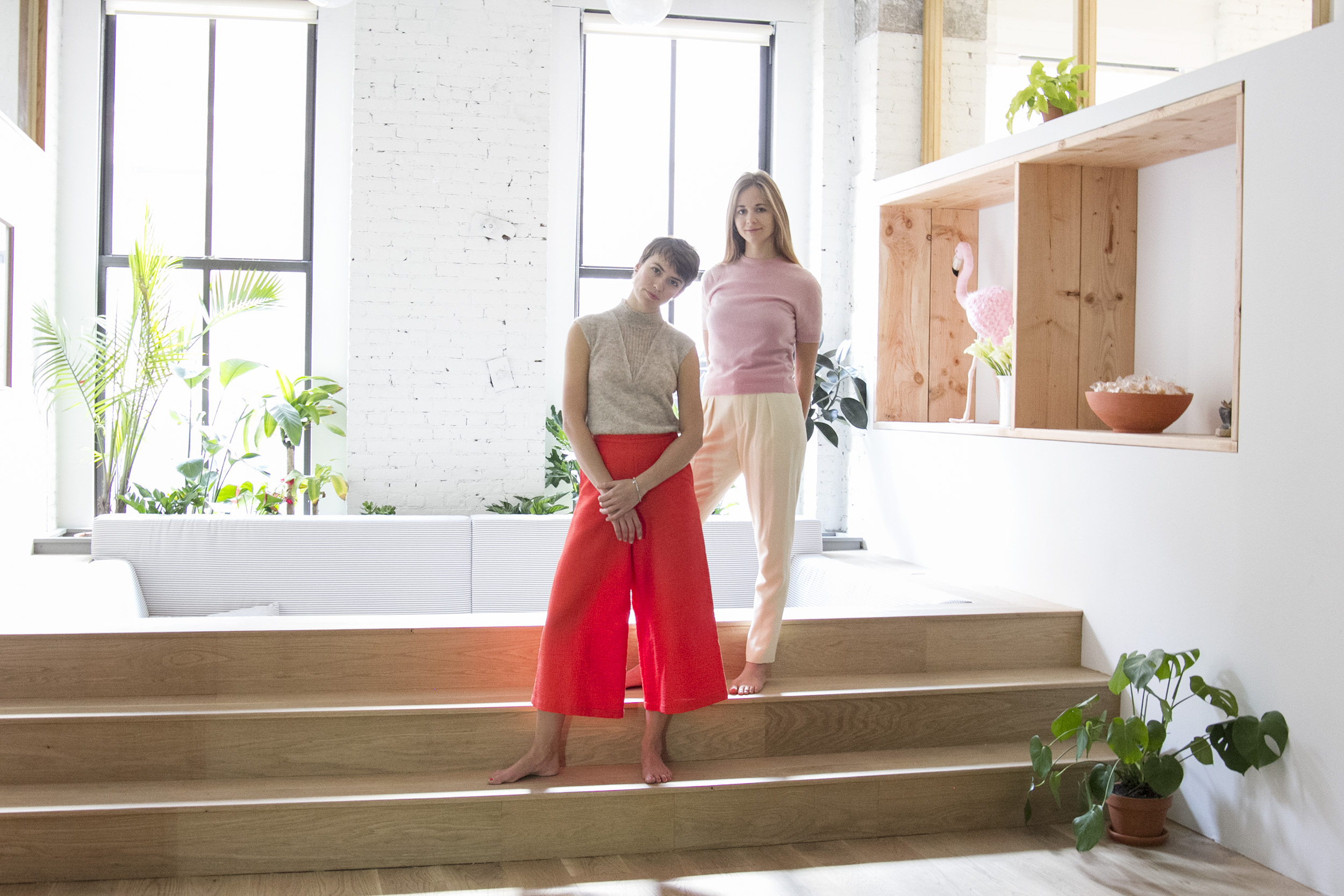 The start of a new year feels like a n opportunity for a fresh start. It’s like wiping the slate clean; a fresh, exciting new chapter unencumbered by what happened before. It gives you the energy to embark on new things. As January gets underway, stress and the endless stream of to-do-lists have a way of throwing you off course. This year, I want to find a way to balance ‘doing’ and ‘being’; a happy middle ground between getting stuff done while feeling at peace. Living in a city like New York that runs at an excruciatingly-intense place, it almost feels impossible but that’s where Sky Ting Yoga founders Krissy Jones and Chloe Kernaghan come in.

There’s isn’t just any yoga studio. Yes, you’ll find many of the most popular forms available but the mantra behind Sky Ting extends way beyond downward dog. The pair are big advocates of a yoga as a lifestyle and a way of keeping chill and grounded in the midst of the madness. Their classes challenge you to push your limits – whether that’s trying a new pose or learning to be more mindful and connected with your body. And it’s working. Models, actresses and prominent women from across the industry swear by their classes both as a means of exercise and personal escape and focus and just this month they opened up the doors to their second studio in New York’s TriBeCa.

HOW SKY TING YOGA GOT STARTED

Krissy Jones: It all stemmed from a desire to create a beautiful space of our own, build our own community, and have the freedom to teach what we believe in most. We had an idea to design a perfect space that we would love practicing in ourselves, and having a high-quality teaching roster that you could trust. At the time, we felt a need in NYC for an oasis that didn’t feel commercial or too granola-y. And instead of students coming to take class and then leaving immediately, we wanted to create a space where people felt at home. That’s why we have a big lounge area, do community events, sell food and beverages, and encourage hanging out.

CK: When we first opened our Chinatown location there was no yoga studio in that area, but a ton of people (us included), that were craving having a space near to home. From the beginning, we wanted to promote the idea of yoga being a practice that goes beyond just a 75-minute class, which is why we prioritize a larger welcome/lounge space in our studios and encourage students to hang before or after classes. New York can feel so isolating at times, that we wanted to create a sanctuary that people could come to for good yoga and good vibes. 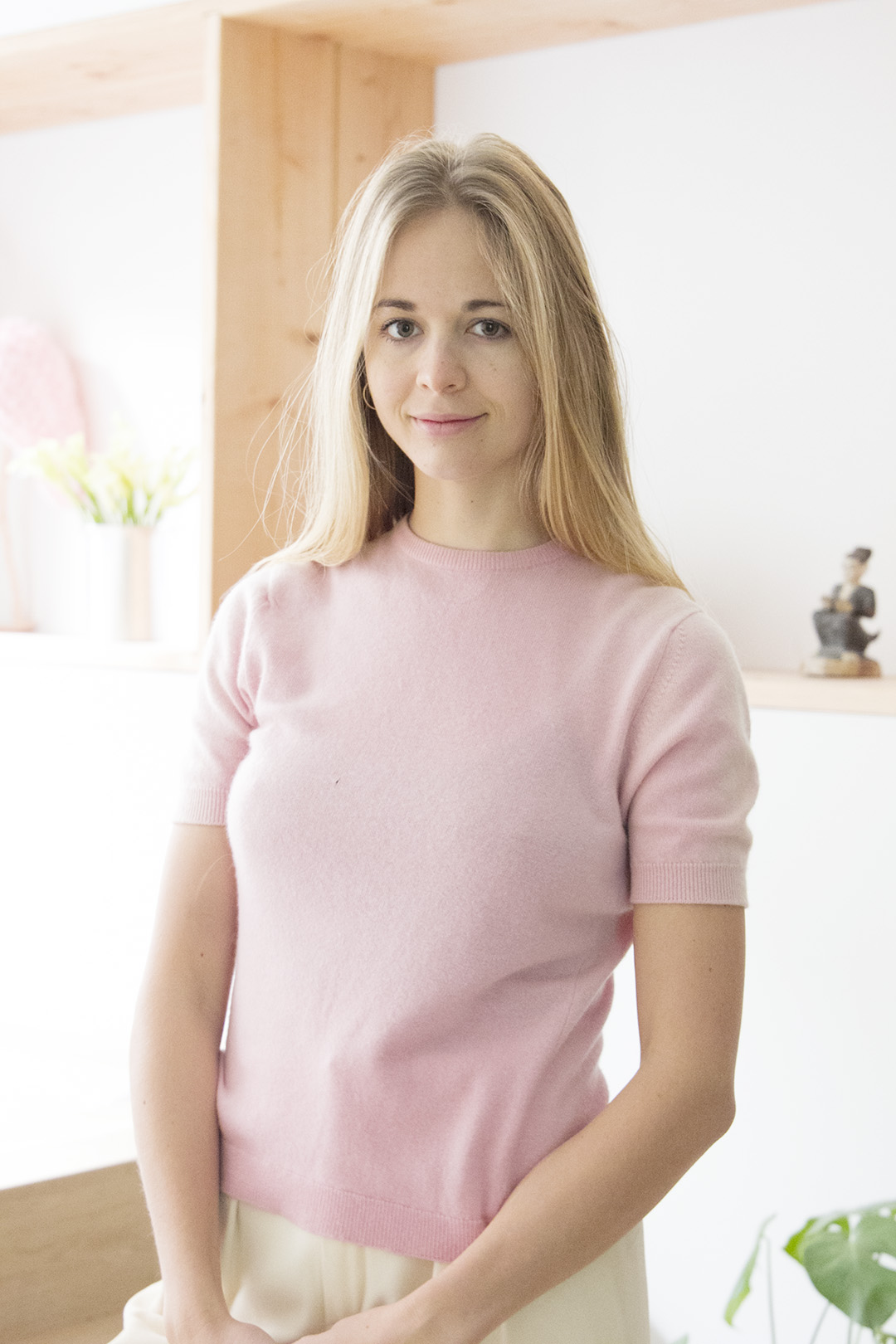 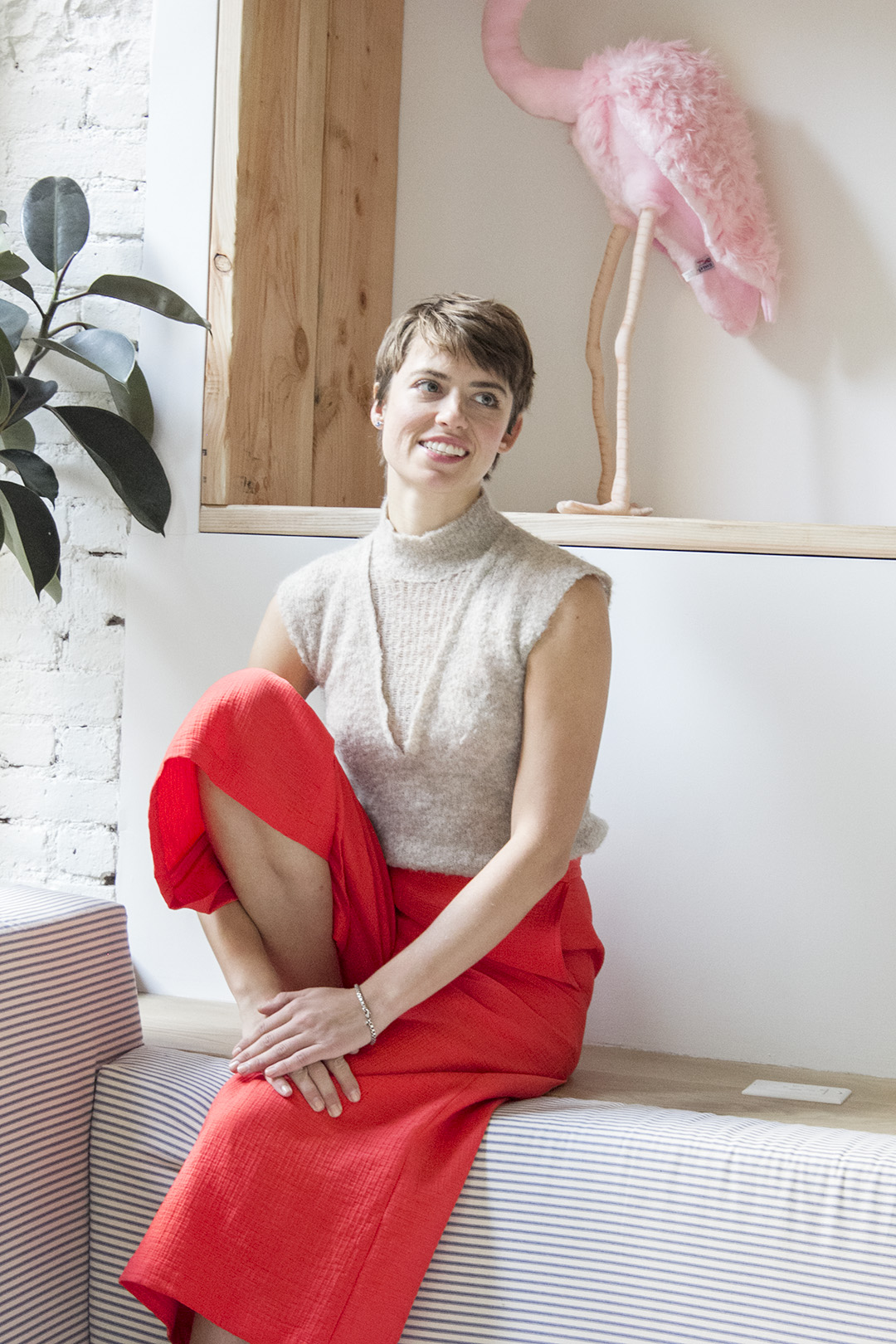 Chloe Kernaghan: We were both initially trained as vinyasa teachers, which made sense considering our dance backgrounds. Krissy and I became close friends once we started practicing at Katonah Yoga with our mentor Nevine Michaan. Her material translated and cross-referenced yoga philosophy that helped us make sense of it all, and her language and technique made the physical work of the practice relatable from a modern perspective. From our studies with Nevine and our background of vinyasa, we developed our SKY TING approach. We believe in braiding different traditions together to create a rich resource of materials for students to learn from.

I’d say the seed of the conversation about us working together was us floating in the Pacific after one of our retreats in Nicaragua. We talked about our larger ideas about where we thought the practice could go and where we would like to take it as teachers. Just a few months later we were celebrating New Years together and Krissy wrote as a resolution that she’d like to open a studio. We talked about it in what seemed like a long-term dream, but the next month she surprised me by saying she had found a lease and wanted to take it for a studio space.

KJ: Chloe and I work seamlessly together. We led so many retreats and trainings together, and had the same teaching philosophy and mentor.  I always knew I wanted to create a space of my own, and I knew it would be stronger and more fun with Chloe involved. It took some convincing to get Chloe to commit to laying roots in NYC, but once she saw the space she was on board and we starting crystallizing our visions for Sky Ting. 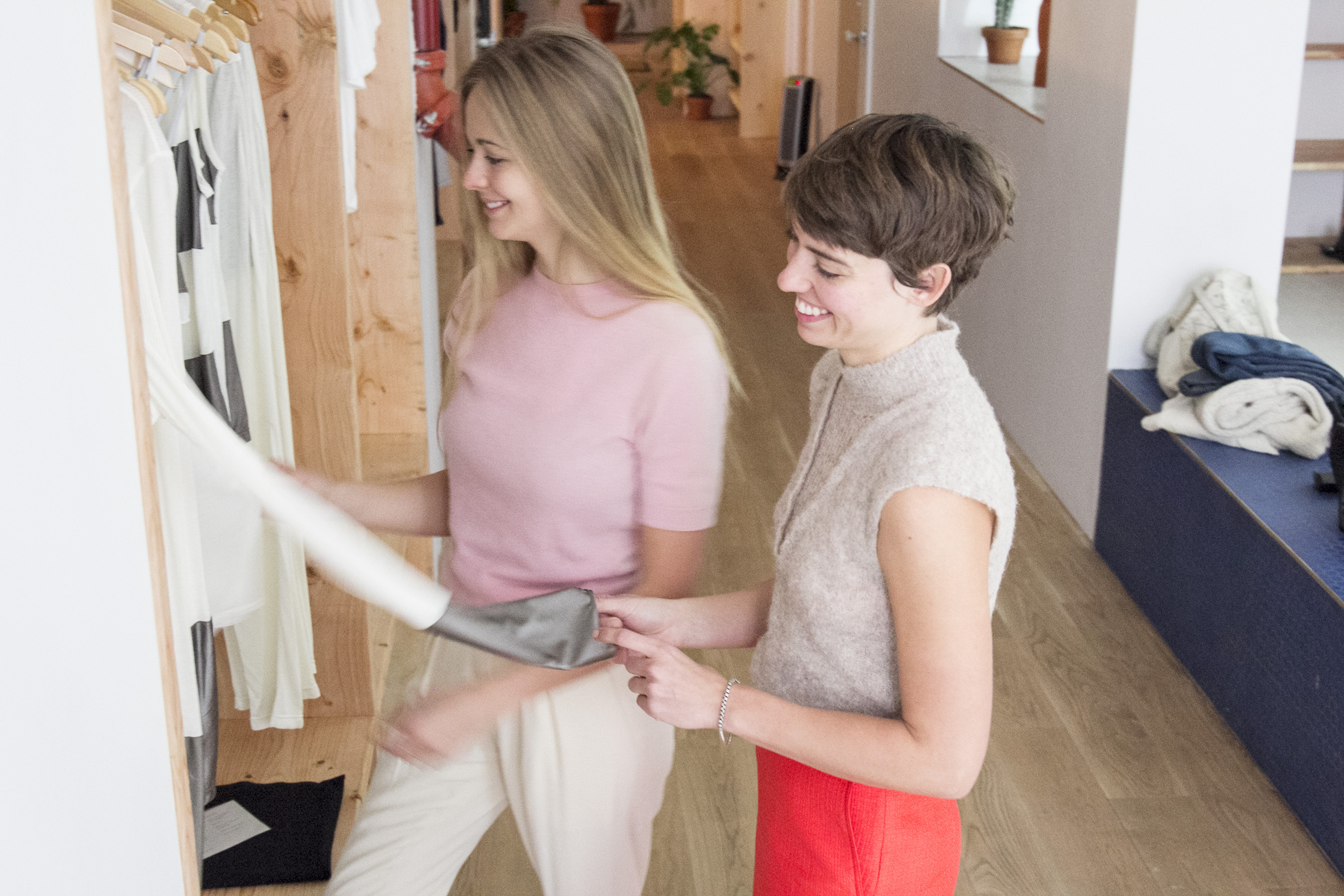 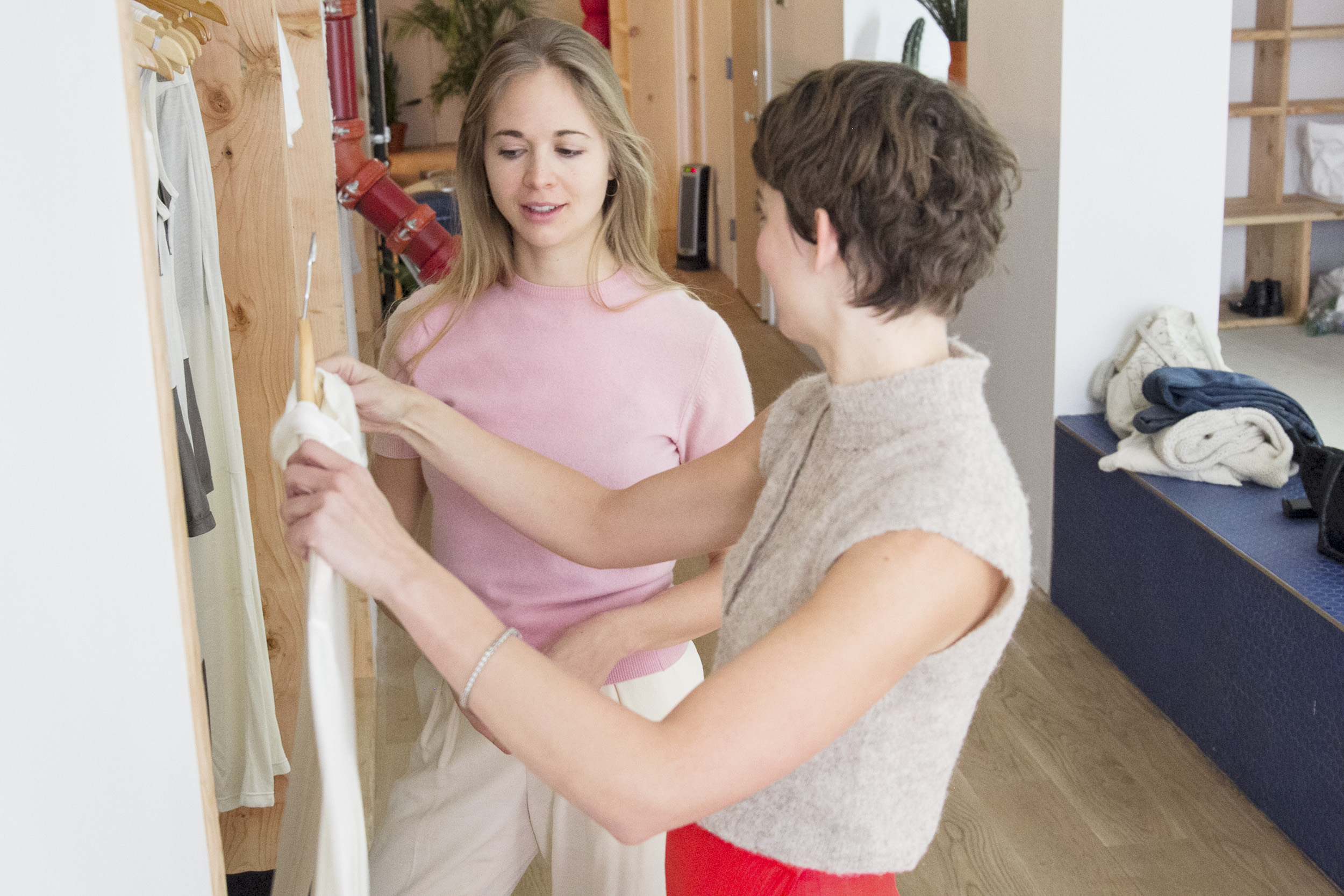 CK: Krissy by nature is a bit more fiery and risky, while I tend to play a little safer and work with a lot of care. These two dynamics have been great as we continue to grow, because we both respect one another’s perspective and know when one needs to trust the other. Krissy is in charge of business development and general studio management, while I run the programming beyond our regularly scheduled classes. This also helps to have delineated responsibilities, so that we can share the workload of it all and so neither of us feels overburdened. We always cross-check with each other on major decisions, and keep each other in the loop when things change.

KJ: We learned everything as we went along, and we’re still learning every day. There have been so many challenges, some in our control, some out of our control, but we try to handle everything as gracefully as possible. We’ve built a great, competent team, which takes a lot of pressure off Chloe and I so that we can focus on growth, programming, and our vision.

CK: We’ve definitely had to get more hands-on with knowing our numbers and understanding our cash-flow model as we add more into the mix with our second space, etc. We’ve been blessed with an incredible team and we luckily have a manager with a business background who helps us with all of this. We considered a raise for our second space, but when we realized we could cover costs ourselves, we decided it was best to keep everything in house for as long as possible and so far so good! 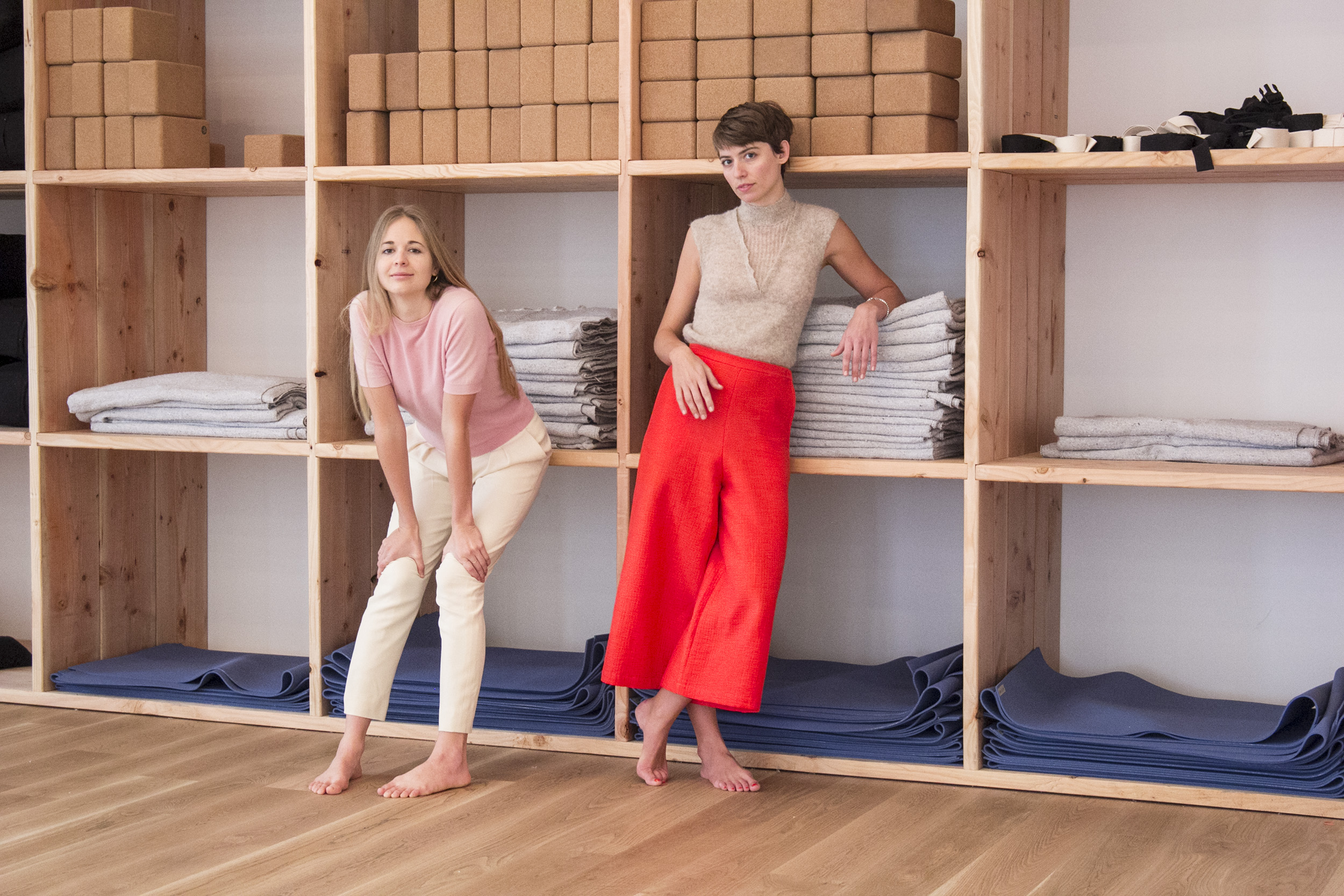 ON COLLABORATING WITH LIKE-MINDED BUSINESSES

KJ: We love collaborating with our friends. It’s so much fun for us and we learn a lot from our peers whenever we work together. We love partnering we people who are doing things that we believe in, and it’s also nice for our students to see their favorite brands coming together. A few relationships that stand out are Dimes, The Smile, Katonah Yoga, Live the Process, Urban Yogis, CAP Beauty, Nike, Planned Parenthood, and our weekly yoga sessions with Outdoor Voices are always a blast.

YOGA AS A LIFESTYLE

KJ: It really isn’t powerful if it is just about doing poses or exercising. We’ve learned from our mentor Nevine that the yoga practice gives you tools to handle life. You learn through the practice how to organize your body so that it functions effectively, how to organize your thoughts so that you don’t get obsessive or rigid, which ultimately allows you to experience more joy in life, which is the key point. The practice helps develop techniques that help you change your feelings and perspective to manipulate life to your advantage, and connect to the bigger picture. It’s so much more than down dog!

CK: For me, this practice is a constant exploration of understanding my body, my mind, and my general state in relation to everything going on around me. It keeps me present and in check, so I don’t get too bogged down by what’s already happened or what has yet to come. As I continue to learn and understand myself, I can more easily relate and understand those around me. I’m finding compassion to be a major part of my world these days, and the practice really helps you understand how necessary that is, while still holding your own ground.

ON THE POWER OF MEDITATION AND MINDFULNESS

CK: It plays a huge role and makes a huge impact. It’s easy to get caught in the fast-paced rhythm of life, especially in NYC, and let all of the to-dos, conversations, activities, schedules overwhelm you. I take great solace in having tools and techniques to give myself the space I need to calm down, to shift perspective, and also to just have a break from the madness.

KJ: We always tell our students to start small. It’s better to do 5 minutes of practice a day than nothing. The hardest part is establishing a regular practice. Start with something you can commit to and you can build from there. It’s important first to establish the habit.

WHY SELF-CARE IS A TOP PRIORITY

CK: You have to build it into your schedule or it just won’t happen. One would think that owning a yoga studio would mean getting to practice on the regular, but with our crazed schedules, I literally will block out the times in my week when I’m practicing, be it at home, or in a studio class. I also make time to go for a sauna visit, facial, acupuncture, or whatever else I might need. If I don’t feel great, I won’t be doing my best work which won’t serve the business. It’s all about the little things. I do a scrub once or twice a week in the shower. I take a bath once a week. I do a face mask. I make meals at home. I make my bed every morning. I take time to practice. I journal. Every little helps.

KJ: It’s inspires me every day to see SKY TING now in its physical form after being a dream for so long. I love setting goals, and connecting to them daily in a ritualized way – through writing, drawing, meditation, and putting in the actual work to see them through!

CK: I’m big on setting intentions. I try and consider everyday why I’m doing the work I do, and how I am seeing that through. I have larger arching goals that I keep in the back of my mind that I find it important to check back in on as well, for both SKY TING and myself as an individual.