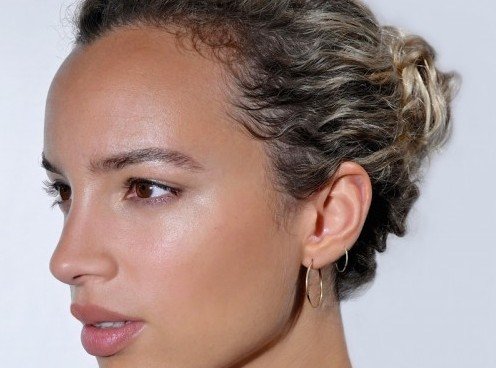 We’re all about celebrating women carving a space for themselves in an industry on their own terms. Introducing, Phoebe Collings-James. 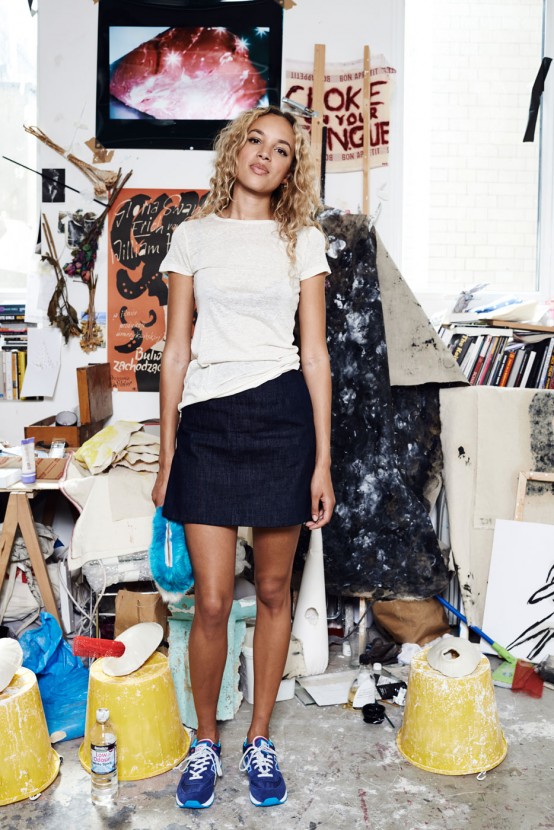 Fresh faced with her light wavy hair pulled into a loose bun with little to no make-up on, artist Phoebe Collings-James is even more beautiful in the flesh than she looks in the countless street style snaps chronicling her eclectic style. Nonchalantly donning a pair of jeans and a simple Sunspel t-shirt, she looks every inch the off-duty model as she ushers our team into her studio overlooking a bustling street in London’s Soho.

Those of you unfamiliar with the name will definitely recognise her face. The half-Jamaican, half-English beauty began modelling at the age of thirteen and, after switching gears to study fine art at Goldsmiths in London, re-entered the fashion world walking during London Fashion Week in 2012, followed by a big profile piece in British Vogue.

While she’s a mainstay on the London fashion circuit, the 26 year old continues to dispel whole London-It-girl stereotype and, since graduating in fine in 2009, has not limited herself to working in one medium.

Away from her success as model, it’s her arresting artworks and compelling authorship in Cunt Today, the blog she started to write original feminist essays, which is really capturing people’s imaginations right now. In the past few years she’s taken part in a month-long ceramics residence in Nuove, Italy, and has exhibited her film installations, paintings and sculptures in galleries from Antwerp to Mexico City.

For Phoebe though, it’s not just about the accolades – of which she has many. She uses her work to comment on social politics and themes like race and sexuality. And in her eyes, the opportunities that present themselves through people’s interest in her style is only another platform to get those views out there. In sum, cast her off as a clotheshorse at your peril.

Here she talks to The Lifestyle Edit about body image, being a feminist, what it’s like to be an artist in London now, why Rihanna is a good role model for body acceptance and why she refuses to be pushed into a box.

The fashion world is a lot more open to the fact that I’m an artist than the art world is about my modelling. The art world is stuck in the forties. You’re supposed to be this starving artist cutting off your bloody ear of something. You’re only allowed to be in connection with any sort of fashionable thing when you’re someone like [visual artist] Dinos Chapman or [performance artist] Marina Abramović. Only then are you allowed do a Givenchy or Balenciaga campaign. Until then it’s still very frowned upon. There are lots of snidy comments, which I find incredibly boring, but I think that’s mainly just in London. London is still a bit uptight to be honest.

Fashion and art do collide. I think in some ways they both have haughtiness towards each other while also being a bit enamoured. I think artists are quite enamoured by how fancy and exciting the fashion world is, even though at the same time they think it’s a bit much.

I don’t ever worry that people’s interest in my style with overshadow my work as an artist. I’m considered about what I do. I think it’s good to be contrary. I don’t want to just follow a particular path because I know that might make some boring people happy or make my journey a bit easier. For me, my daily life is being an artist and so long as my work continues to be good for me and so long as I’m enjoying it and am happy with the way it go, I don’t care if people get upset that there’s a couple of stories out there talking about what shoes I’m wearing.

I don’t shy away from talking about topics I feel strongly about. I just think, who cares what I’ve eaten for breakfast? Who cares really how many times I go to the gym or things like that? As soon as these types of opportunities came up to be in all different types of magazines, at first I was like, I don’t know about this and allow myself to be asked lots of stupid questions but one day I had a light blub moment and realised I can talk about whatever I want. If someone asks me wear I buy my shoes from I can say, I love Katherine Hamnet and the fact that she’s an activist, you know what I mean? I just found that really exciting.

I’m against the idea of fast fashion and making people think that they constantly need to consume and ASOS is so questionable when it comes to that but there magazine is one of the best things a girl could read. There’s always a really exciting girl on the cover; they use so many different races of models; there’s always someone inside with a job that I’ve never heard of from a different industry. That, to me, is amazing. If I can contribute to something that appears to be not that cool or not as high brow, it’s not fucking Art Review, it’s ASOS – but at the same time if I’m in ASOS talking about these exciting things I’m doing and I’m thinking about then that to me is actually really cool.

The reason that fashion is fun the dressing up aspect and wearing things that make you feel good. That’s why this whole body image stuff is really weird for me. I love the idea of people really feeling good in their skin. I hate this homogenized view of beauty where everyone wears the same lipstick and looks like they’re in a pop girl group. That for me is my idea of everything that’s wrong in the world.

That’s why I think Rihanna is the most exciting person to look at image wise. Every day it’s something different. I love the way she uses her body; I love the way she uses nudity. It’s not all thrust up. Even when she has her boobs out, they’re not all hoist up; there was this great picture of her at basketball game and one boob was under her armpit, the other was going the other way. There’s just a naturalness to her. She just seems so comfortable in her own skin and it never looks forced.

Photography by Paul Whitfield for The Lifestyle Edit.