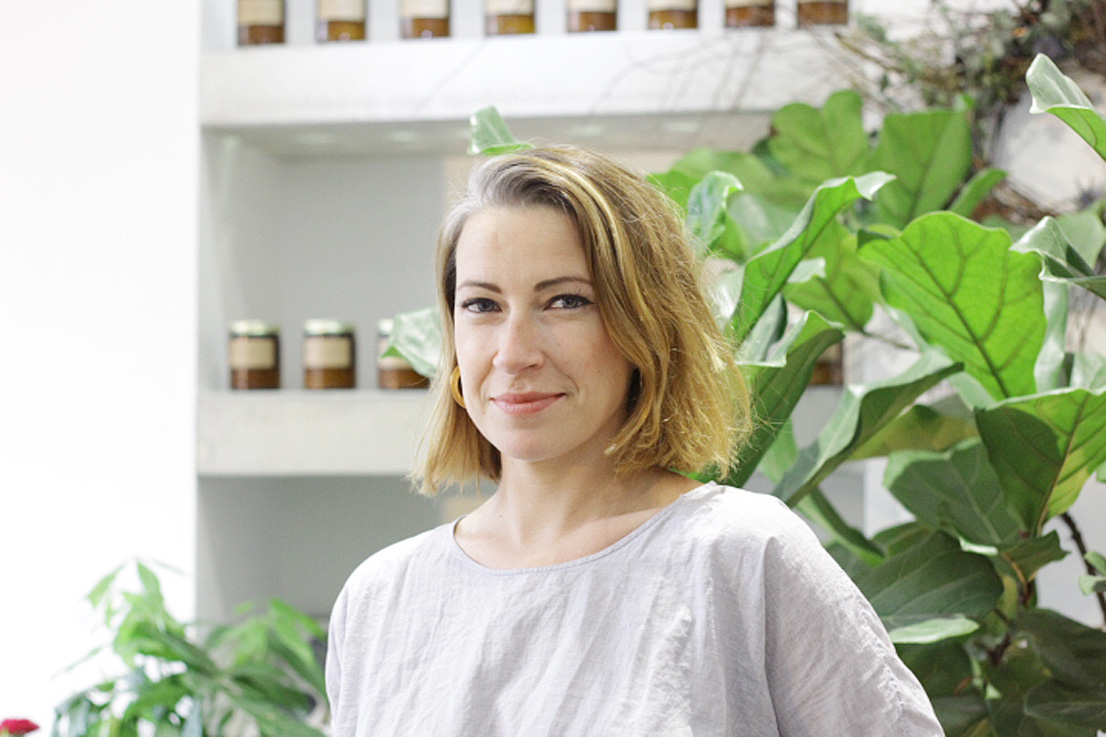 Three years ago she wast in a job she hated. Today, she runs one of the coolest florists in town.

It’s midday on a rainy Friday and I’m nestled at the back of a trendy little restaurant hidden away behind Hackney Road having breakfast and Bloody Marys with Grace & Thorn founder, Nik Southern. On the way over, people greet her by name – people whose faces I recognise from fashion parties and whose names I’ve seen on the masthead of magazines. Even the waiter ushering us in knows her. In fact, the tiny restaurant is lined with her handiwork.

Making herself comfortable in the corner opposite me, she quickly launches into an account of the eureka moment when she decided to be a florist. It almost never happened. She spent 11 years working in IT recruitment before taking the plunge. “I hated my job,” she says. “I’ve always been quite creative so I knew I needed to do something else.” She rang a life coach she used to work with who made her do a psychometric test. “It was so intricate and it literally brought out my personality to a tee. It came up saying that I love gardening, I hate structure and I hate corporate environments and lots of other things that about my personality that are totally spot on.” After dabbling with the idea of going into interior design – “I love interiors but I didn’t enjoy the drawing side and got bored of it” – she enrolled onto a floristry course with Jamie Aston and the rest, as they say, is history. “It was the first time in my life where I had this overwhelming feeling like, ‘this is the thing I want to do.’” 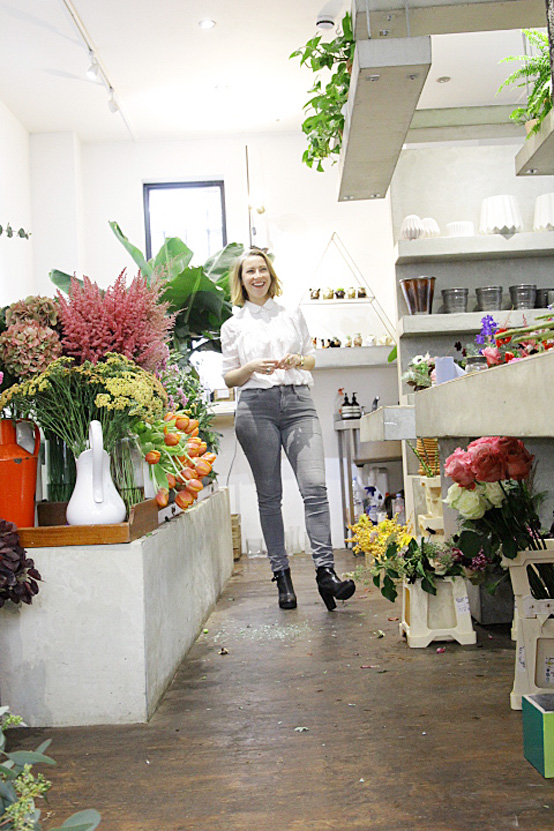 She couldn’t be further from the image we’re all guilty of attributing to florists. For starters, she’s not retired, nor is this a side hobby designed to fill her time In fact, she couldn’t be further from that. The week we meet, she’s moving house and is preparing to open the doors to her second shop, this time in Soho, so time isn’t something she has much off. She’s also young, stylish and, well, fun. Her laugh is infectious, the type you could recognise a mile off, all of which makes it difficult not to be immediately taken by her. “There are a lot of traditional, old school florists but I think there’s a new wave of us that are doing thing differently.”

While she may be having fun, her operation is a serious business. She started making bouquets for friends and family from her living room before moving into a small basement studio in Dalston but things quickly began to change after she bagged a gig with Whistles. “That changed everything for me,” she says, humbly. “I hadn’t even done a wedding at that stage. I nearly shat myself when I got the gig.”

The phone hasn’t stopped ringing since. First up was a gig doing the store windows for LK Bennett as part of a local Chelsea in Bloom competition to coincide with the Chelsea Flower Show, which she went on to win. Lush dinners settings for Max Mara followed shortly afterwards, along with collaborations with the likes of Alexander McQueen, Christopher Kane, House of Holland and Giles Deacon. Estee Lauder’s a client too.

Southern isn’t you’re average florist though. Her style is distinctive – you can spot a Grace & Thorn creation a mile off. Don’t expect twee bouquets overflowing with hydrangeas and roses. She’s instinctively drawn to creating something rustic an altogether a lot cooler and has made it her mission to show people that the possibilities don’t start and end with pretty, symmetrical floral decorations. “I always want my bouquets to look different. I hate when they look identical and perfect. When it comes to weddings, for me the best ones are when people ask for mismatched pots and vases and mix flowers with greenery. I love that. I always say to people that in a garden, you’ll find flowers and you’ll find greenery,” she continues. “Greenery brings so much texture and interest. I could get a jam jar and put some greenery and foliage and it’d look beautiful rather than just shoving a handful of roses in a vase.”

It’s not as difficult as it looks, she tells me encouragingly. “I think if you have a good eye for colour, you’re 80% of the way there. It’s like putting an outfit together. It’s all about understanding balance. It’s about not being afraid to play around. I love happy accidents. Sometimes I’ll be working on a bouquet and pieces will fall on the floor and I’m like, ‘wow, I love that.’”

It’s that eye that people come for but, what with the opening of the new store and the company getting bigger, how does she manage to keep that consistency, I ask? “That’s what’s so difficult. I often make something and take photos and give it to the girls to recreate. Nothing goes out the door without me looking at it. The girls take photos of everything and send it to me. I’m a hard lady to please but you have to be.” 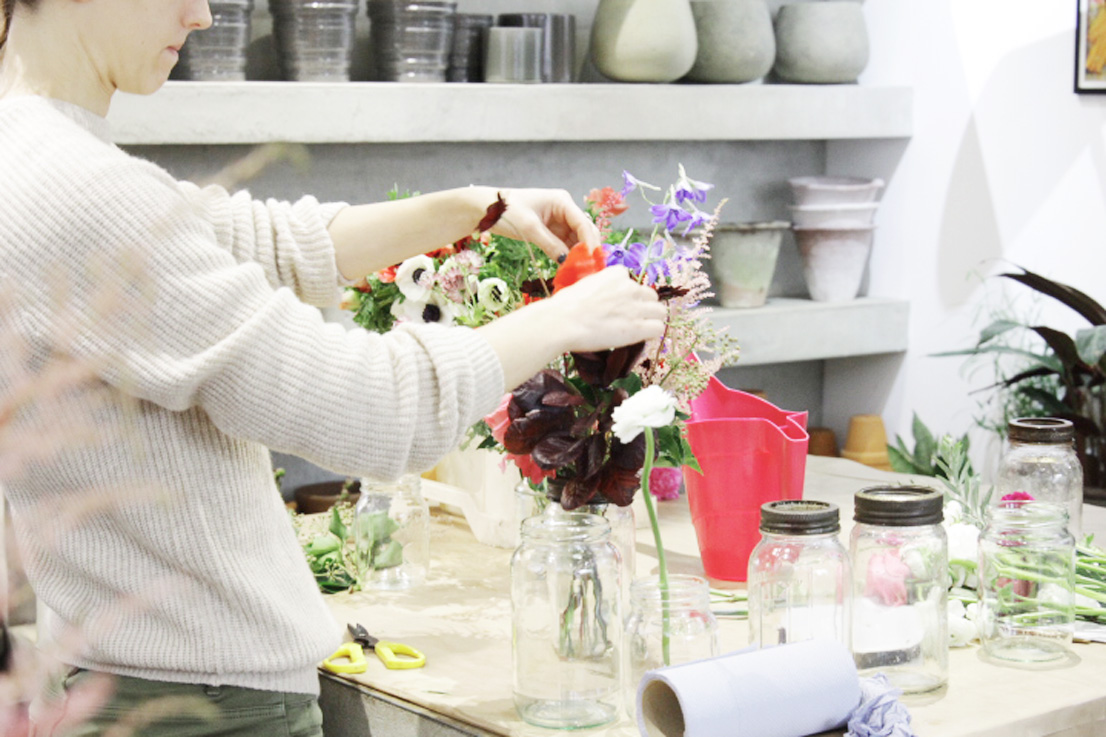 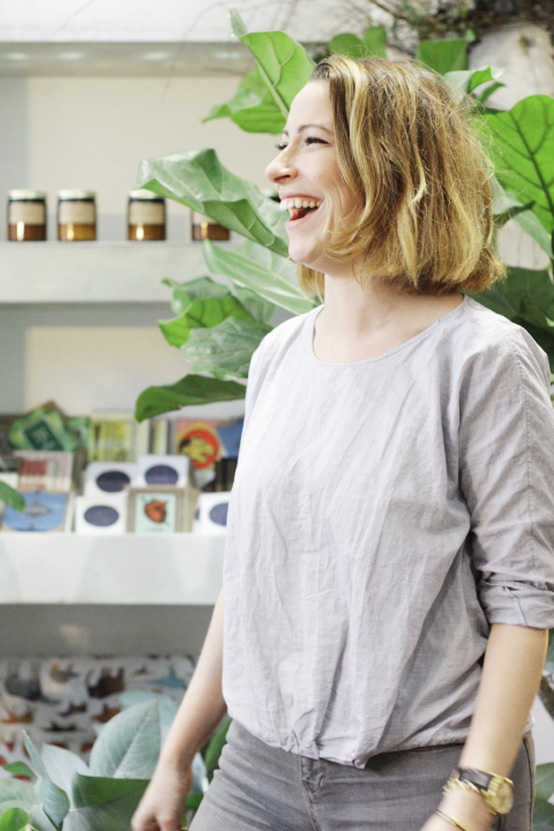 It’s certainly paying off. The Hackney Road store has become quite the destination. “We do get people just coming in to take photos. I always get nervous that they’re sussing us out to start a shop around the corner but it’s all for Instagram,” she laughs. In fact, a large portion of their orders come straight from Instagram and “we’ve had people travel from the other side of London and even places like Holland and Paris to come and see the shop because they’ve seen it in magazines.” Even one of her staffers came to applied for a role after seeing an interview she did in a magazine.

Opening a store was never in her plan though. “I always thought it’d be really expensive to make a shop look really good,” she explains. “You have to have flowers on display all the time and as soon as flowers come in, they have a shelf life and I don’t want people to come in and see four days old flowers.” That’s partly why when you walk in, you’ll see as many plants in an assortment of sizes and pots as you do flowers.

Whether down to Instagram and social media or not, flowers are definitely having a moment right now. At one point, covering your home with them felt indulgent but that seems to be changing. According to Nik, more and more customers are buying bouquets for themselves rather than simply as gifts and she’s busier than ever hosting masterclasses. The week before we met she hosted a 60-strong workshop for the Topshop team at Shoreditch House. “I’m always trying to show people that you don’t have to spend a fortune on flowers. You can use jam jars and things like that so that you use less but they look just as powerful. It’s all about how you style and position them and the types of flowers and greenery you use. It doesn’t have to be expensive.”

It’s been just over three years since she walked away from her old life and embarked on a new journey with Grace & Thorn. Was she scared, I ask? ‘Absolutely! I used to be an anxious person but now I’m just like, ‘whatever.’ I just feel like if you put your mind to something and really believe in it, there’s no reason why it shouldn’t happen. All of my girls think I’m so ballsy but you have to be. When I say I’ve made it off my own back, I literally have. Cease the bloody day. Nobody’s going to hand it to you.”