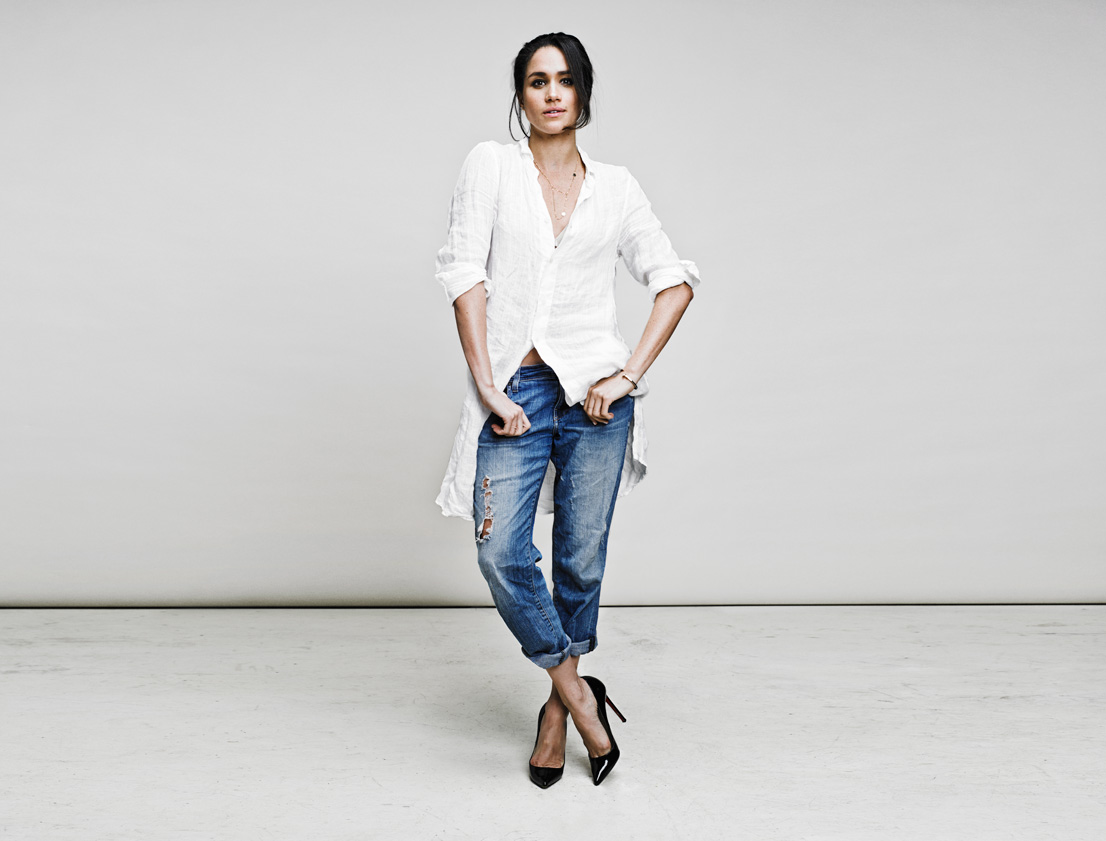 The star of hit TV show Suits talks women in TV, making sure her voice is heard and why she plans on following in the footsteps of Jennifer Aniston. 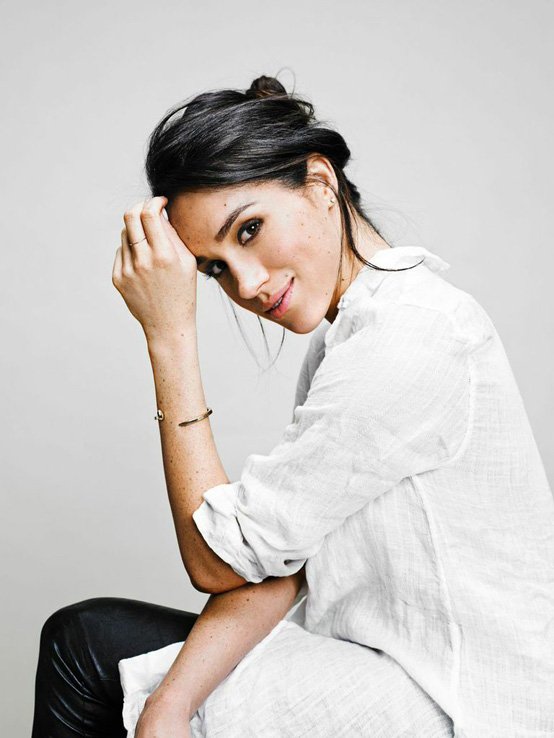 Suits actress Meghan Markle is busy. When we talk, she’s just arrived in London for a fly by night trip to work with online fashion retailer, THEOUTNET.COM. She’s posed for its ‘A-Z of dresses’ campaign; modelling a series of dresses for the letter P, devoted to power dressing.

‘I love shopping on THE OUTNET.COM because you can get all those great pieces and silhouettes that you’ve coveted for so long at a really great price,’ she tells me. ‘It’s a lot of fun and immediate gratification!’

The trip comes off the back of an intense bout of travelling ever since she wrapped up filming season four of the show. In the last few months she’s travelled to over a dozen countries, from New York and Los Angeles to Afghanistan and Rwanda and only two days after we speak, I see on Instagram that she’s off again, but this time in Malta, working on a secret project with Elle UK.

Those of you who have been binging on Suits since it first aired back in 2011 will know Meghan Markle as Rachel Zane, the clever paralegal and part-time associate at Pearson Specter law firm. For the uninitiated, the show, which is now in its forth season, is set in the shark-infested world of US corporate law. Cases rarely get as far as the courtroom though. Instead, we watch as lawyers at the firm try to our manoeuvre the teams on the other side through legislative loopholes, gambling and bluffing their way though big corporate deals.

Even in today’s era of Netflix where we can catch up on programs as and when we feel like it, Suits has become one of those rare shows that makes you want to tune in and watch, the moment a new episode airs. ‘We really didn’t know what Suits was going to become at the time,’ Markle explains of the shows success. ‘The first year, we were in such a bubble – the show wasn’t airing in Canada [where it is filmed]. But now, there’s security and fans and tears when we’re filming so it’s been such a wild ride for all of us.’

Where the likes of Kerry Washington and Clare Danes started off in films before landing big TV roles, Markle got her start on the small screen in an episode of General Hospital, before starring in shows like 90210, CSI: NY and Castle. Films are definitely in her future – ‘I would love to craft my career like Jennifer Aniston or Jennifer Garner – starting in TV, transitioning into lighter films, and then moving to a chapter that includes heavier film choices or quirkier roles’ – but right now she’s enjoying the power of television.

‘If you go to the movies, you are with those characters for 2 hours. On TV you have me in your home; while you’re in your pyjamas and eating dinner and you’re likely to see me every week for years,’ she says. ‘It creates a familiarity and an excitement that film can’t produce in their short window of time. It gives audiences time to become invested in characters and allows writers the time to get the time to craft a story.’ Are there many similarities between her and Rachel, I ask? ‘We’re both incredibly ambitious and driven and both pride ourselves on striving for excellence.’

Strong female characters are the types of roles Markle has always been drawn to. Even at her first audition, where she was supposed to play ‘Hot Girl No 1’ and simply say ‘hi’ in A Lot Like Love alongside Ashton Kutcher, she was adamant not to play just another pretty, nameless girl and convinced the director to write more lines into the script. ‘I suppose I’ve always lived my life that way,’ she says, when I ask if she’s always been that tenacious when it comes to her career. ‘They can only say no, so why not ask?’

Markle has the perfect balance with Rachel’s character. She’s sexy but doesn’t traffic in her sexuality, nor does she manipulate people with it. Rachel’s character is transgressive in a way TV audiences haven’t see in many female characters because she’s clever but she doesn’t wear a white hat. As much as her legal gravitas is put to the fore on the show, Rachel also has no qualms kissing Mike, despite knowing he has a girlfriend and that’s before we start talking about her dalliance with a married man.

‘It’s so incredibly important to have multi-layered female characters. To not just be the ‘girlfriend’ or the one who wiggles about in a pencil skirt. I often say that in jest about Rachel, but truth be told, what I love about her is her intellectual prowess and the fact that she has always been the moral compass of the show,’ she tells me. ‘When she misstepped, it broke my heart, but it was also very humanising,’ she continues. ‘I think all of those layers are important, because as women, we try to find the balance but it’s not always easy and we need to see that reflected in characters on TV as well.’

As an auditioning actress, you are so hungry for work, you are willing to say yes to things that you actually may not want to do. You’re just so happy to work that even if something is remotely uncomfortable, you say okay. I am 33 years old and so over that. I would rather speak up, respectfully voice my opinion and be able to sleep at night feeling good about the choices I made.

That’s partly why she refused to do multiple scenes of Rachel entering in a towel. ‘While there’s a time and a place for Rachel to be in a towel, it’s not all the time – just as I don’t feel she needs to be studying in boy shorts and a tank top. She can be attractive, while clothed and I’m incredibly fortunate to work with  producers who not only hear me, but respect me when I’m saying it’s something I’m not comfortable doing,’ she explains. ‘As an auditioning actress, you are so hungry for work, you are willing to say yes to things that you actually may not want to do. You’re just so happy to work that even if something is remotely uncomfortable, you say okay. I am 33 years old and so over that. I would rather speak up, respectfully voice my opinion and be able to sleep at night feeling good about the choices I made.’

She grew up in the thick of the entertainment world in Hollywood. Her father is a retired photography director so she practically grew up on the set of Married…with Children. In her teens though, she had every intention of pursuing politics over acting, even doing a stint at the US Embassy in Buenos Aires. ‘I enjoy being knowledgeable about what’s going on in the world, and trying to do something to effect change. Now I’m incredible fortunate because by being an actor, it creates a higher profile so that the passion projects that are important to me are listened to in a different way.’

Last September she was in New York to support Emma Watson in her HeforShe Initiative for UN Women and after nine months quietly working behind the scenes for UN Women, this month she was announced as its new Advocate for Women’s Leadership & Political Participation back.

Off the back of Suits, labels are now flocking to dress her, but fashion is something she’s taken a liking to relatively recently. ‘I had a transformative moment at a Miu Miu fitting a few years ago,’ she says. ‘Until then, I hadn’t seen fashion in that light – I could wear beautiful clothes for a role, but that was still for a character – not for me. This moment was my first understanding that I could play dress up in my real life and it could feel so good.’

Her style has changed. It’s less California girl and more paired back and classic. ‘I think as you get older you feel more confident and you don’t need to put that much effort in – to be able to throw your hair up in that very French way doing things.’ Her wardrobe is full of basics – but basics done well. ‘I did a closet edit recently and asked myself: what would [Vogue Paris fashion editor] Geraldine Saglio wear? The outcome was a massive overhaul and pairing down to key basics that will always look flattering and make me feel good.’ As part of her collaboration with THEOUTNET.COM, Markle appears in a string of images celebrating the power dress, which, she confesses, is a staple in her wardrobe.

Despite the buzz around her right now, Markle is a rare breed. You won’t see her falling out of clubs or going to opening of an envelope. She spends nine months out of the year filming Suits in Toronto and every spare minute goes to her website, The Tig, which she launched on her own a little over a year ago. ‘I wanted it to be a place where I could share all of the amazing things I now have access to, but also to help redefine the idea of beauty and to feature influencers who are doing positive things in the world.’

How does she balance it all? ‘You just make it work,’ she says, matter-of-fact, and for the foreseeable future at least, she has no intention of choosing one over the other. ‘I love being able to do it all. It’s work but it’s worth it.’

The only question left is, what’s next for Rachel on the show? ‘Oh, if I told you, the creator would kill me,’ she laughs. ‘And then there would be no more Rachel…or Meghan for that matter.’ With all of her burgeoning success, we highly doubt it.

See more from The Outnet’s A-Z of dresses here.