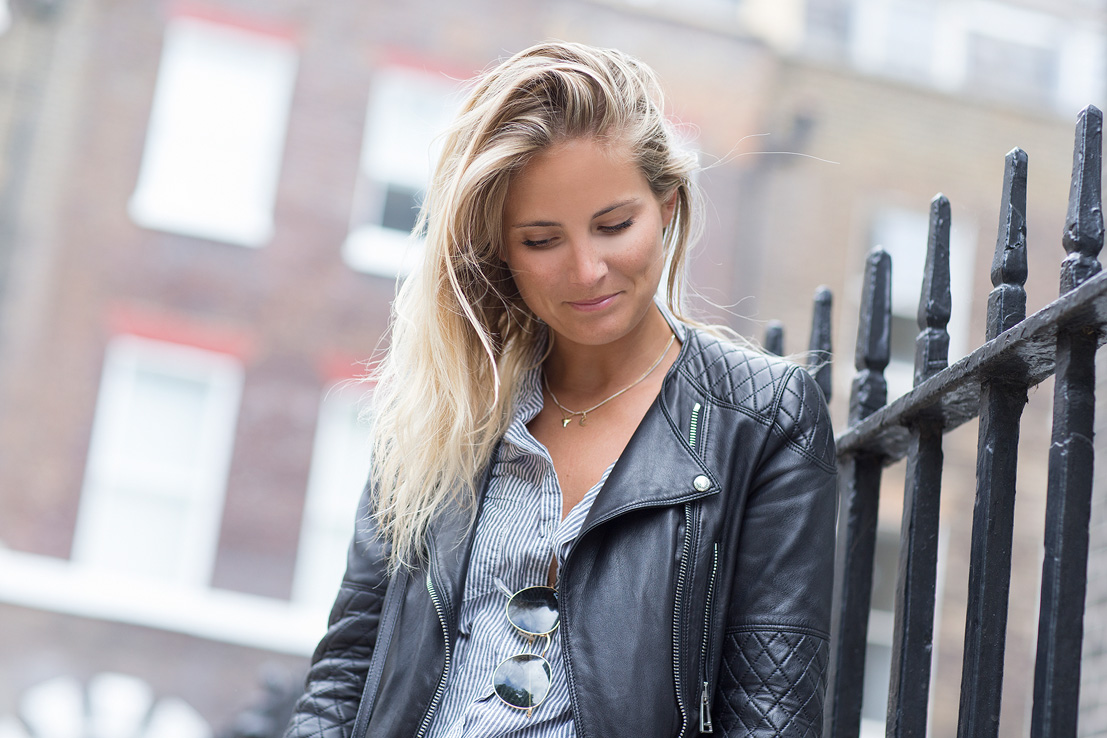 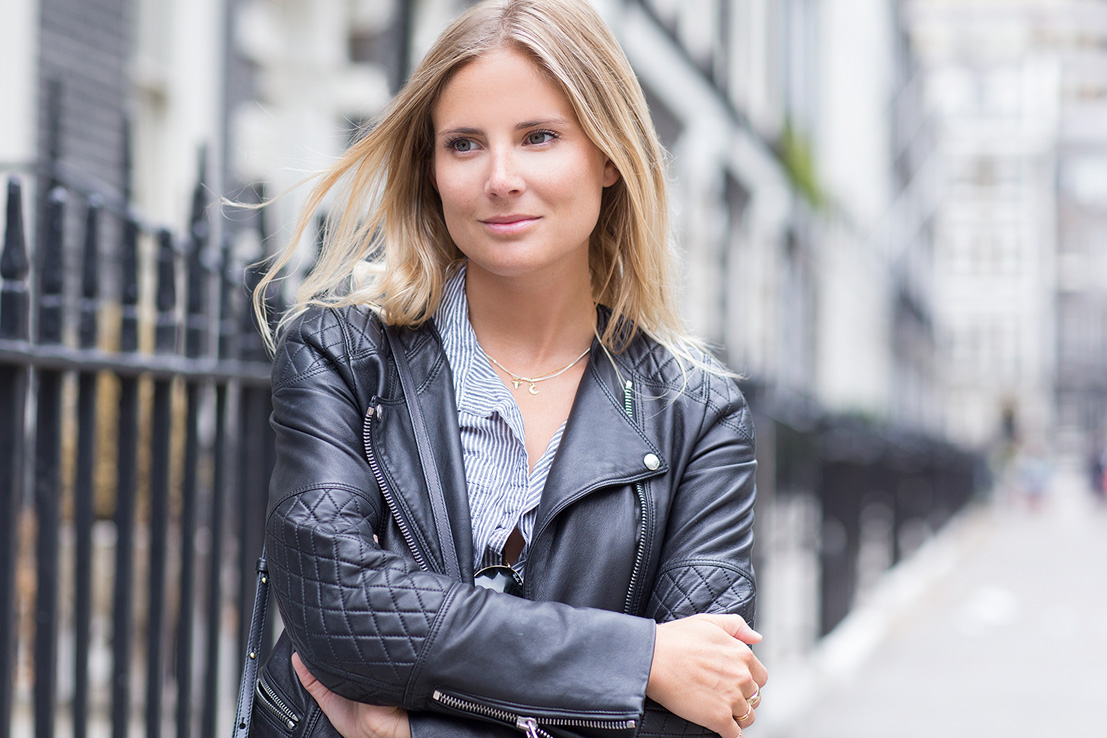 “If only I’d come up with Pinterest first!” Lucy Williams bemoans in between shots on our street style shoot. “I was a total magazine junkie throughout school and university – always the girl that ripped out editorials, fashion ads and kept shoe boxes of clippings under her bed.”

It’s early August when I meet Lucy outside our offices in Bedford Square, and London is in full high-summer swing – the kind that still calls for bare legs and 5pm Prosecco on a Tuesday, despite the imminent turn of the season. Everyone is in high spirits, albeit, the fizz Lucy gives off when she talks about her work is certainly infectious.

Lucy, to those who don’t know, is the blonde, effortlessly tousled head behind Fashion Me Now, a phenomenon she started as a personal moodboard, that now – at last count – boasts a following of 86K on Instagram and 552K on Pinterest. To those followers, she stands as a prominent tastemaker, her styling posts as enchanting as the exotic locations she escapes to. And this, from the girl who admits to having to fake it during her first internships. “I was incredibly green when I first started interning,” she laughs when we sit down for post-shoot coffee. “I basically had to pretend I knew vaguely what I was doing. I’d never even used a steamer before and came back from my first shoot with burns all over my wrists!”

Those burns well healed. she speaks pragmatically about her time, clear on how her journey to the here and now started. “I interned at a fashion PR agency, InStyle, the Daily Mail and Sheerluxe.com, and then went on to assist at Sheerluxe and InStyle which were each incredibly varied. My role at Sheerluxe, for example, was a great starting point as I was doing lots of CMS work, writing SEO pages and generally learning the basics of nurturing an online publishing site. InStyle on the other hand was amazing for giving me an understanding of how print magazines are put together. It was entirely based on shoots and shopping pages, so I was dealing with product all day, everyday and working with PRs on a daily basis, as well as understanding what role advertising plays. I started working relationships then that I still have now, so it was brilliant for immersing myself fully into the industry. I also got my first 3 fashion weeks at InStyle which were so exciting and eye-opening back then. It was a crazy old world.”

“What all of them taught me though,” she sums up, “was to be incredibly more organised, plan for every eventuality and balance a million things at once. I think I also learnt pretty quickly that I feel stress much more when working under pressures for others and probably knew then that I wanted to be my own boss one day.”

Before this could happen came three years at Stylus, a trend forecasting platform where she started as a researcher and climbed to Assistant Editor for Fashion & Beauty. “It was totally different from what I’d done before”, she explains, “and gave me the chance to write critically and analytically on everything from catwalks to sustainability and beauty innovations, which I really wanted. It was awesome working alongside really creative, talented people in so many different fields; interiors, science, food, retail. I was conducting interviews, travelling to tradeshows around the world and helping to curate bigger, wider-reaching trend reports and predictions.” 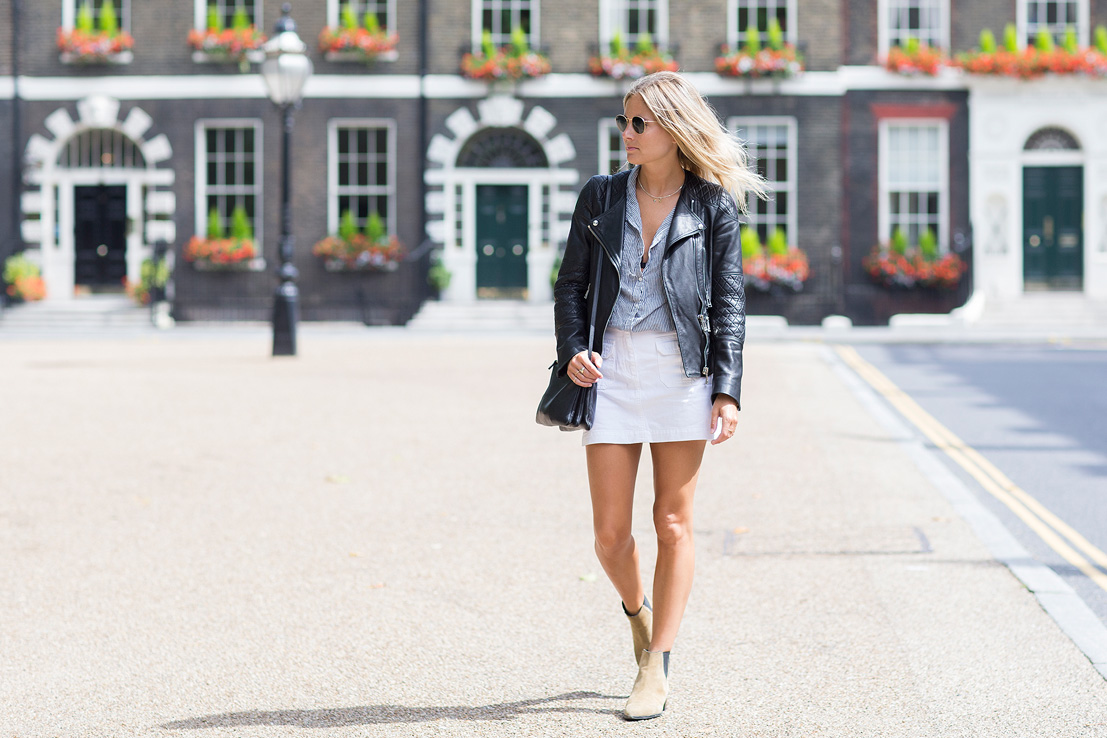 “It was totally different from what I’d done before”, she explains, “and gave me the chance to write critically and analytically on everything from catwalks to sustainability and beauty innovations, which I really wanted. It was awesome working alongside really creative, talented people in so many different fields; interiors, science, food, retail. I was conducting interviews, travelling to tradeshows around the world and helping to curate bigger, wider-reaching trend reports and predictions.”

How do you even begin the impossible task of predicting, how socio-economic factors invariably affect the way we get dressed in the morning, I ask? “Ultimately, trend prediction is about taking in the bigger picture, from the economy to what movies are coming out to major art exhibitions. It’s about using this along with current editorials and collections and your own gut instinct to imagine how things will evolve and develop.”

“The economy is super interesting and influences us all even if we don’t know it,” she adds. “It normally goes that in times of austerity or recession, we look to neutral, minimal aesthetics and palettes that stand the test of time, while when things begin to boom again, we all start wearing bolder, brighter, more-trend led and expressive clothes.”

Such insight has no doubt served her well in shaping her own site’s content, which she became the sole line of attention after Stylus. “I suddenly couldn’t think of anything else I wanted to do,” she explains. “I found myself spending every evening and weekend working on it. I realised if I was working on it so hard with a day job, I should really just make it my day job!”

Since then, projects for commercial partnerships have come through in their hoards. She even played designer for a special capsule collection for jewellery line Missoma. “It was so much fun seeing ideas in my turn into actual product and then see other people wearing them. It turned out to be a huge success and we’re currently designing more items that will go on sale later this year.” 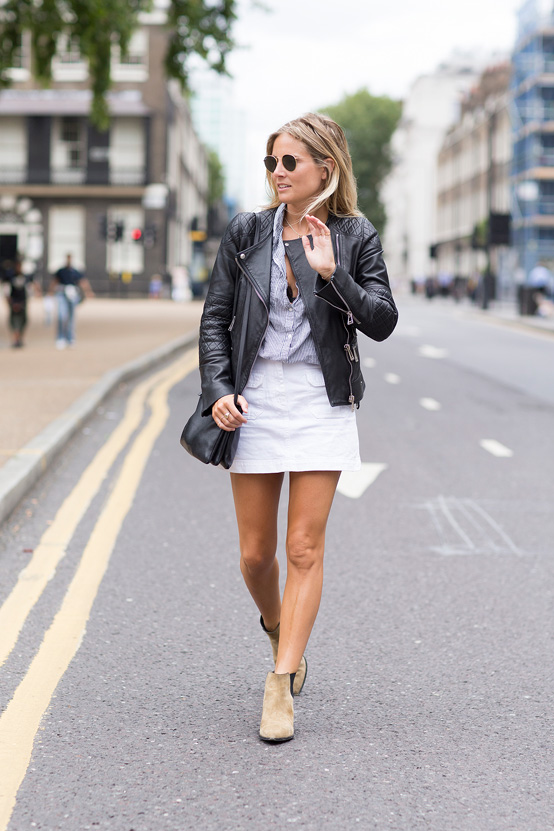 Like many freelancers who work from home she struggles with the work/life divide. “It’s a constant work in progress,” she tells me. “It’s especially hard at home as time spent without your laptop can almost feel like wasted time. You really have to force yourself to put the work aside and take time to do normal life stuff like cooking, going to the gym and catching up with friends. I’m hopefully moving to a bigger place by the end of the year so I can have more of a dedicated work space at home that I can shut the door on come 7 p.m! I’m lucky in that the quieter days are very few and far between and with all the travelling I do, there’s never really been a day when I’ve been twiddling my thumbs which I’m super grateful for.”

On that laptop, you’re likely to find Pinterest and Instagram up on the screen, though she also sites Slufoot, Creephard and Jaclyn Paige among her other go-tos for online inspiration. “I mainly try and think about what I would like to read as that’s really what a blog should be; your personal take on things, and I’m the only real barometer there can be. I’m always working on things like my photography and editing tools to try and keep evolving the imagery on the site and jot things down about the functionality of the site that I can bring up with my web designer when we meet. It’s super important to listen to readers too… See what gets the most feedback and listen to what they’re asking for. They’re the only reason you have a job after all, and their feedback really keeps me passionate about the job.”

Finally we move onto the fashion. Citing Charlotte Rampling, Jane Birkin, Ashley Olsen, Kate Moss and Caroline de Maigret as her pin-ups, and a love for Acne, Isabel Marant, Joseph and Chloe, does she think her style transcends the other aspects of her life?

“I think everyone’s does. From where you travel, to what products are lining your bathroom shelf, it’s all down to personal taste. I think there’s continuity in everything I do but I’m definitely not a purist; my home for example is a lot more feminine and colourful than my wardrobe! Sometimes I have a case of split personality syndrome when I’m trying to decorate but it’s just about waiting it out and seeing which bit wins. But I think people who like how I dress are similarly interested in what I cook or where I go on holiday. I’m definitely like that – I love seeing every element of people’s lives! I think I’m just eternally nosy to be honest…” It seems to be working.

Photographs by Dvora with art direction by Naomi Mdudu