From Alter-Ego To Confidence Coach: The Blogger Bringing Fashion And Feminism Into The Spotlight

She’s known for her eclectic style, but fashion is just the beginning for Freddie Harrel, says Hannah Rogers. 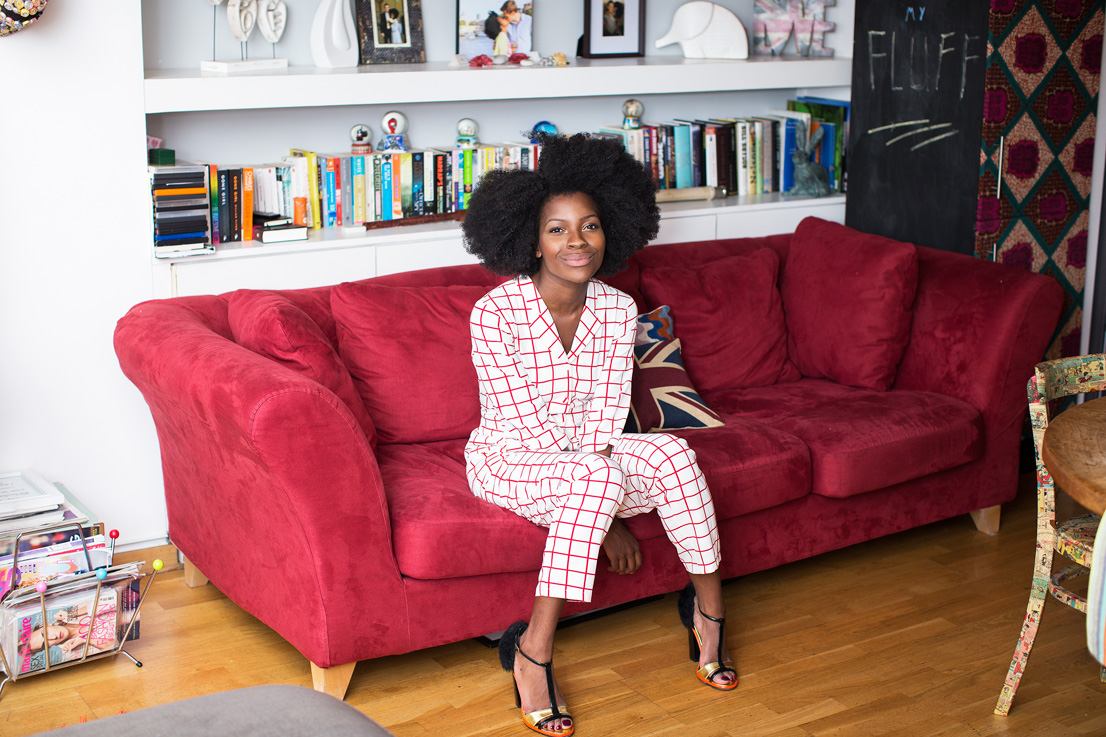 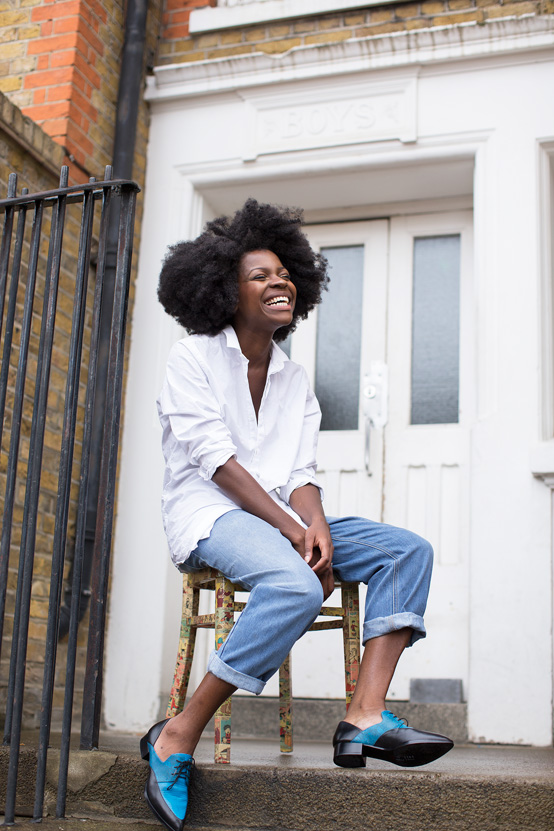 “I would describe myself as a fashion burrito!” enthuses Freddie Harrel on the Monday morning we meet at her home in South London. This is not quite how you might expect the cool Parisian blogger to describe herself when coaxed about her style, but then Freddie seems to be all about the unexpected. For starters, well in advance of our arrival, she warned that she had ‘messy nieces’ staying, albeit, no trace of this mess was visible from our side. She also just looks great first thing on a Monday morning. Forget a team of hair and make-up, all this girl seems to need to do is roll out of bed – the glowing skin, wide smiles and 70s Solange hair (she is all about the era’s trend for next season, naturally) does all the work for her.

“I love to dress like a boy, so I collect suits and masculine brogues,” she says in, her Parisian drawl. “But, I love my high heels too and bright colours – and I have a lot of bright trainers. I clash and mix everything together, because I love the fun of it, so my style is a mix of different things wrapped into one.”

It’s this eclectic mix that has won Freddie a legion of fans, which, at last count, on Instagram at least, clocked in at an impressive 36,000. It’s partly what helped kick start her career too. At 28, her CV reads like someone who always had a plan, from swish roles in digital marketing, retail, blogging, styling and now confidence coach. But she admits that this was not always the case. “It took me a long time to find what I really wanted to do. Growing up I was obsessed with being successful at school, and I had a clear idea of what success meant. I’ve always been in private schools, and Paris can be so elitist and conservative – from a young age, I started thinking that I wouldn’t be “successful” if I wasn’t a doctor, a lawyer, or a banker. So I chose the latter and graduated with a Masters in Finance. It sounds so crazy to me now!”

“I started working in banking and hated it, so I went back to school and did an MBA in eBusiness. I loved that it was creative with the marketing side of things, but still very close to figures.  Then I started my career in digital marketing and landed a job in fashion, but it was purely random! So I was working for companies like ASOS, Topshop and Vestiaire Collective as a digital marketing manager, but was frustrated working so far away from the clothes. By this time, I had completely changed my views on “success”, and started considering a career in styling or designing.”

It was at this point too, that she launched her blog: “My fiancé convinced me to start it, as a way to get this creativity out and to express my passion for fashion on the side, just so I could cope with my daily job more!”

As women, we’re often meant to believe that we are weak. But you don’t owe pretty or sexy to anyone, to be considered worthy and loveable. You don’t need to hide or censor who you are to evolve in your career.

The blog, Freddie Harrel, launched in 2013, which she also ran alongside work as a Personal Stylist at ASOS. It was here, upon seeing the impact social media was having on the site’s youthful target audience, and the self-esteem issues they were having when it came to their clothes, that she discovered she needed to go out alone. 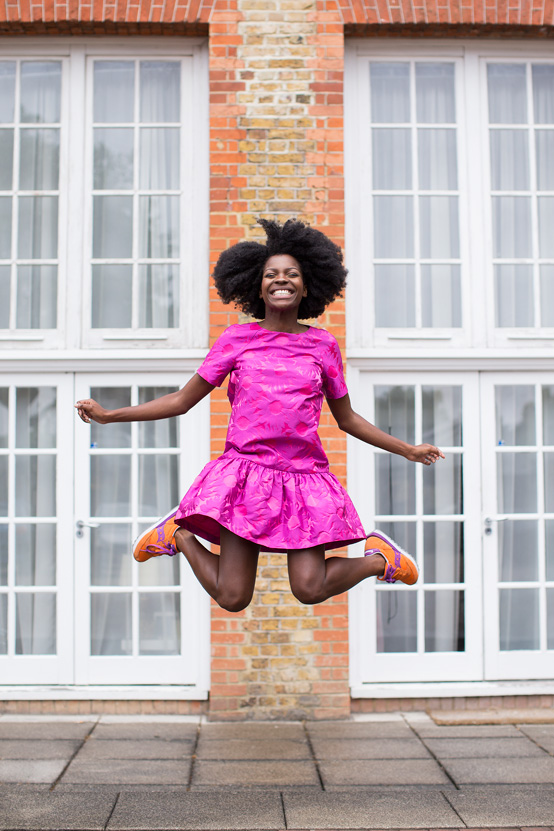 “I wanted to share my own vision of empowerment and femininity, and inspire girls and women to bring more of who they are in their style and attitude; to show them the benefits of celebrating who you are rather than focusing on who you want to be perceived as. I was doing this a bit at ASOS, but I knew I would be able to do it more if I was on my own.”

Despite her larger than life style, she’s secretly shy, which is precisely what puts her in a good position to talk about it. The Frankie in her blog, for example, was conjured as a way for Freddie to work anonymously, and avoid feeling intimidated when posting online. Though she now posts as herself, Frankie, her alter-ego remains. “Frankie sounded cool, bold and brave. Everything I thought I wasn’t at the time. Starting the blog in Frankie’s name would shield me from people’s critics, but very much from my own too.”

The success of the blog, she says now, has been down to her, “authenticity and a positive attitude,” both of which she attributes to being true to her own style, constantly smiling and not taking fashion too seriously. It is also through this that she has been able to see the vision she developed at ASOS through, with her SHE Unleashed project.

“How could I start to experience and love the person I would see in the mirror, make her as bold and strong as I wanted her to be?” she asks.“Everywhere around me, on social media, TV or in my everyday life, the idea of fashionable – the idea of beautiful – seemed to be about how sexy you can be. As women, we’re often meant to believe that we are weak. But you don’t owe pretty or sexy to anyone, to be considered worthy and loveable. You don’t need to hide or censor who you are to evolve in your career. With She Unleashed, I want to help women to love who they are, to explore all their personalities and celebrate them and to claim their confidence and power back, because you won’t get stronger until you fully accept and channel the real you. Once women realise that, they can see that there is nothing they can’t do.”

With all this on the go, she has also been busy planning her September calendar for the impending fashion weeks, although there’s one event she won’t be rocking her usual mixes of clashes and prints – her wedding, in the South of France. She hasn’t told us who she’s wearing, but expect something good. “It is fashion week after all!”

Photographs by Dvora exclusively for The Lifestyle Edit. Art direction by Naomi Mdudu