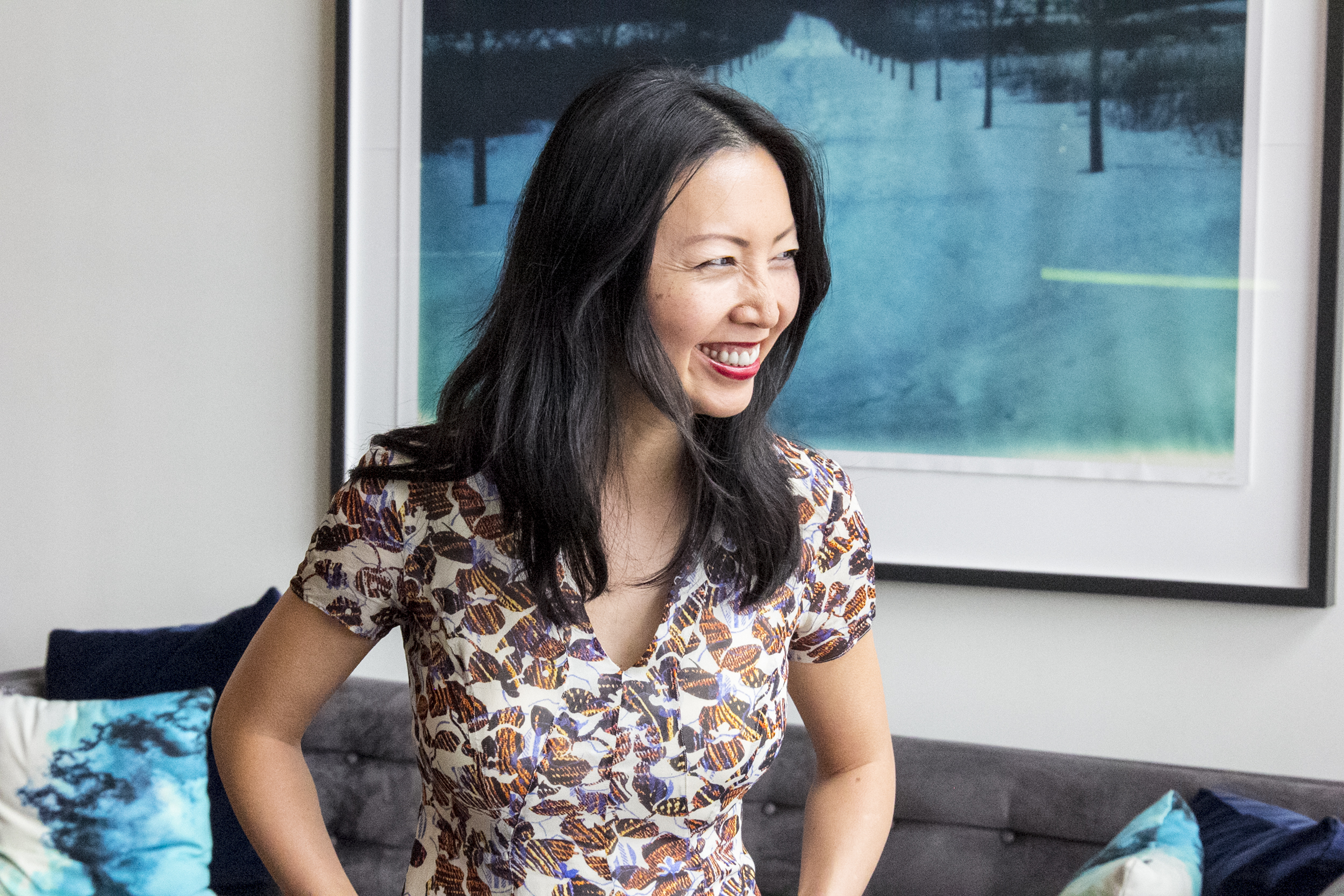 Thinking of Changing Career? Take Notes From The Founder of Ellis Brooklyn

How Bee Shapiro started off her career as an attorney, and ended up launching her own beauty brand.

One of the best pieces of advice I’ve ever received was that after graduating, you shouldn’t take the first job that’s offered to you (unless, of course, you really, really want it). Inexperienced and eager to take home a regular pay cheque, all self worth and belief is quickly replaced with doubt and the misconception that you should be grateful for whatever’s thrown at you, that you’re lucky to have a job. This thinking snowballs from your first job to the last, and before you know it, you’re ten years into a career you’re not sure that you want. Breaking free from a role that doesn’t serve you is tough when your next move isn’t in place, but boy is it liberating.

Bee Shapiro knows the feeling. She started off her career as a New York hedge fund attorney, quickly becoming unarmoured with the “monotonous” nature of her work. She saved four months rent and quit her job. There was no grand plan in place, no big ‘fuck you, I’m moving onto this other amazing job you’ll all be jealous of’, nothing. She simply got her ducks as linear as she could, and that was that. Random gigs here and there gave her the first taste of a byline, and from there on in, it was evident that writing was her jam. Eight years later, and while reviewing products for the Times, Bee fell pregnant and discovered that much of the products she had been trying out weren’t safe to use while carrying her daughter. Ellis Brooklyn was launched with the intention of “making fragrance safer, but still as enjoyable as all the greats.”

It sounds like a meteoric leap – maybe a little too lucky – but she credits the generosity of friends, most of them competitors, and having the courage to be honest with yourself as aiding her journey. From working relationships to balancing her time between home life, writing and Ellis Brooklyn, Bee shines a light on the path that led her to where she is today. 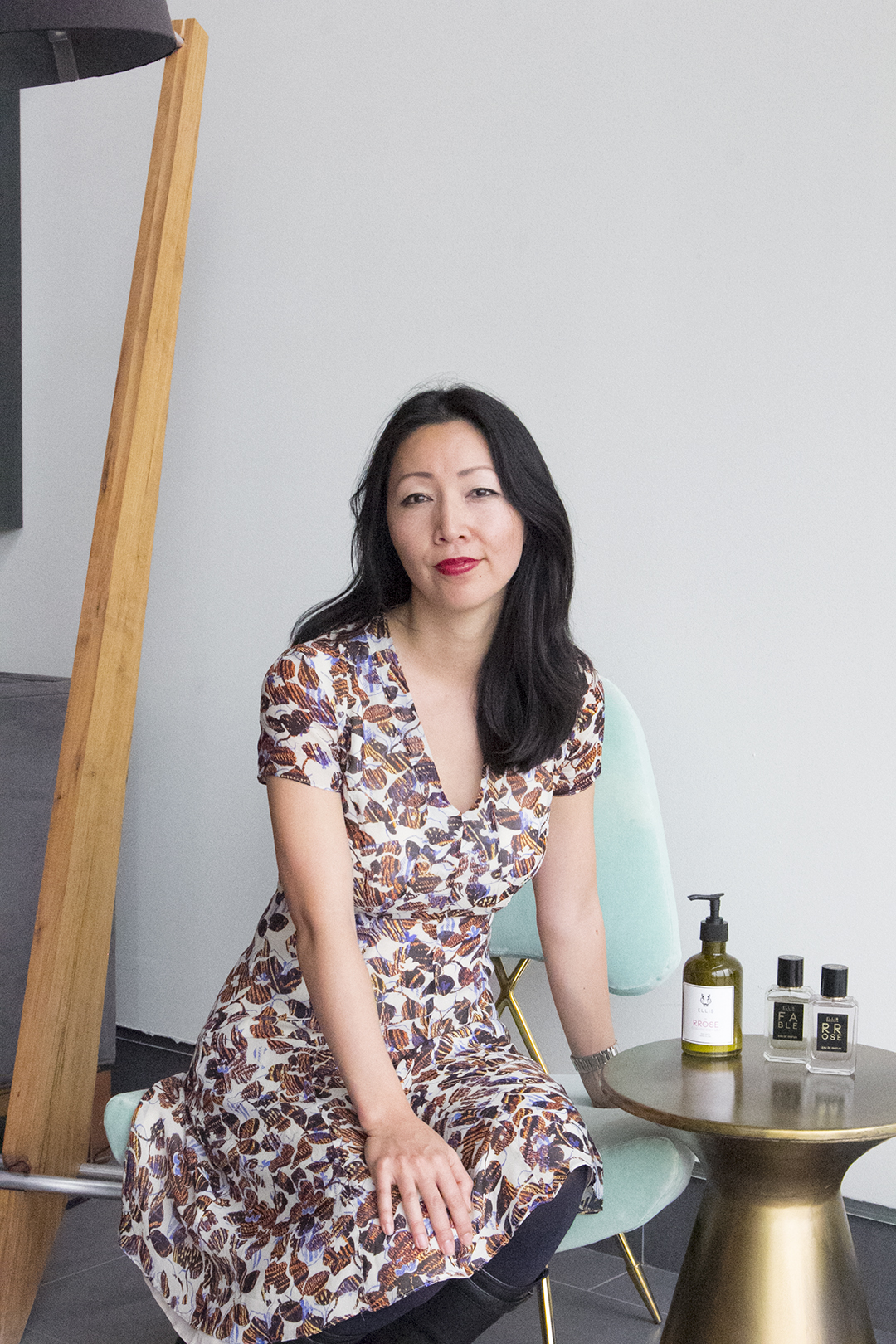 HOW SHE LEFT HER CAREER AS AN ATTORNEY TO BECOME A WRITER: I started out in New York as a hedge fund attorney in Midtown Manhattan. It was a monotonous job—I had zero interest in moving commas and tweaking legal templates. So one day, fed up with it all, I quit. I had no other job. I had barely any savings. Enough savings actually to pay for my rent for four months and that was it. I dabbled in a bunch of odd jobs but found writing to be true. I could reread a piece I wrote over and over and found different places to improve. Best of all, I enjoyed the process—everything from the interviewing to putting the piece together. From there, I started building my writing credits. Eventually I started writing for T: The New York Times Style magazine. After an editor in chief change, I moved over to the paper. I’ve been writing for the New York Times Style Section for more than 8 years now.

ON WHAT IT TAKES TO TRULY EARLY A LIVING FROM WRITING: It took me years to get to the point where I wasn’t worrying about paying my rent check every month. The hardest part, perhaps predictably, was the beginning, especially because I was transitioning from a job with a set salary to one where I had to constantly hustle. I tell people it’s like rolling a snowball and if I only have a few minutes with someone, then that paints a good overall picture. But for those who want to succeed in freelance writing for the long-term, there are a few other noteworthy hiccups. For example, I got my start writing for online publications, and unfortunately most online sites pay a pittance. They’re good for ratcheting up bylines but impossible to live on alone. One of my toughest hurdles was convincing editors that I could write meatier pieces for print. It involves a lot of pitching, a lot of networking and some luck. Today, print is dying, and so goes with it the better pay. So now writers are scrambling for all sorts of projects from marketing to social media to consultant situations to make it work. So it’s really about staying deft and open to change, but also being able to see other avenues where your writing skills can be an asset.

ON THE RISE OF FORMER EDITORS STARTING BUSINESSES OF THEIR OWN: I do think print is on its way out. Or it’ll continue to exist but won’t be the focal point of a newsroom or a magazine. One reason we’re seeing print editors starting businesses of their own is because the skills for print and online are sometimes quite different. In print, you can nurture an in-depth story. It’s gratifying for a words person. For online, it’s a different game in that you’re definitely focused on clicks and SEO from the topic of the story to the headline.

THE BIGGEST TAKEAWAYS FROM WOMEN SHE’S INTERVIEWED: Tamara Mellon surprised me. I wasn’t sure what to expect—I had read the British tabloids, I had followed how she separated from Jimmy Choo. She was incredibly lovely, and frankly, a fun lunch date. I never liked interviewing women who feel the need to be a certain character or persona to the press. Tamara answered everything straight on and with some humor too. I interviewed Barbara Corcoran for an entrepreneurship column I used to have with More magazine before it shuttered. She’s a hoot! She also gave great business advice: she’s a pragmatist and recognized women entrepreneurs raise significantly less funding than their male cohorts. She suggested attending a pitch meeting with a male employee and to also wear bright colors to stand out in the board room. It was interesting, unflinching advice. I’ve also interviewed Anna Kendrick a few times, both in person and over the phone. She’s funny (humor is obviously very important to me), talented and a real person. She’s also a pro. Sometimes celebrities, especially the up and coming ones who want to make a good impression, might act like they’re your new friend. I’ve been doing it long enough to know the act is just for those 30 minutes. Anna is an example of how you can be witty, nice and interesting­, but naturally so.

HOW ELLIS BROOKLYN WAS BORN: I was reviewing beauty products at the Times when I became pregnant with my first child. This was the time Tata Harper was getting off the ground and RMS makeup was revamping. Exciting new changes were happening in the makeup and skin care worlds in how companies approached toxins, ingredients and formulas. Being a fragrance lover, I couldn’t find the same parallel happening in scents. I wanted a safe option that didn’t compromise on the quality scents that I loved. That’s how my fragrance and bodycare company Ellis Brooklyn came about. It started with the idea of making fragrance safer but still as enjoyable as all the classic greats. A grand ambition, I know. But why not shoot for the stars? It took me 2 years to come out with a product and now we’re about a year and a half old and stocked at Sephora.com, Net-a-Porter, Barneys and more. I believe in safety above all else. I initially sought to make it an all-natural perfume brand, but once I started working with the perfumer and labs, I discovered quickly that not all naturals are safe and not all synthetics are bad. We do try to veer as natural as possible though and also we adhere to European safety guidelines for fragrance testing. The U.S. is far more lax.

CUTTING THROUGH THE NOISE & THE ART OF THE EDIT: When I started Ellis Brooklyn, it was and still is, popular to release a huge collection of scents. While, yes, it looked pretty on the counter, as a beauty editor it was overwhelming and underwhelming at the same time. There was the sheer number of scents, but also there might be one or two great scents in an 8-scent collection and the rest were really blah. So when I started Ellis Brooklyn, it was really from an editor’s point of view. I launched with just two body milks. We’ve slowly added releases since then. I want each one of my scents to stand on its own. Every scent should have the potential to be a hit, otherwise, I don’t want to release it. 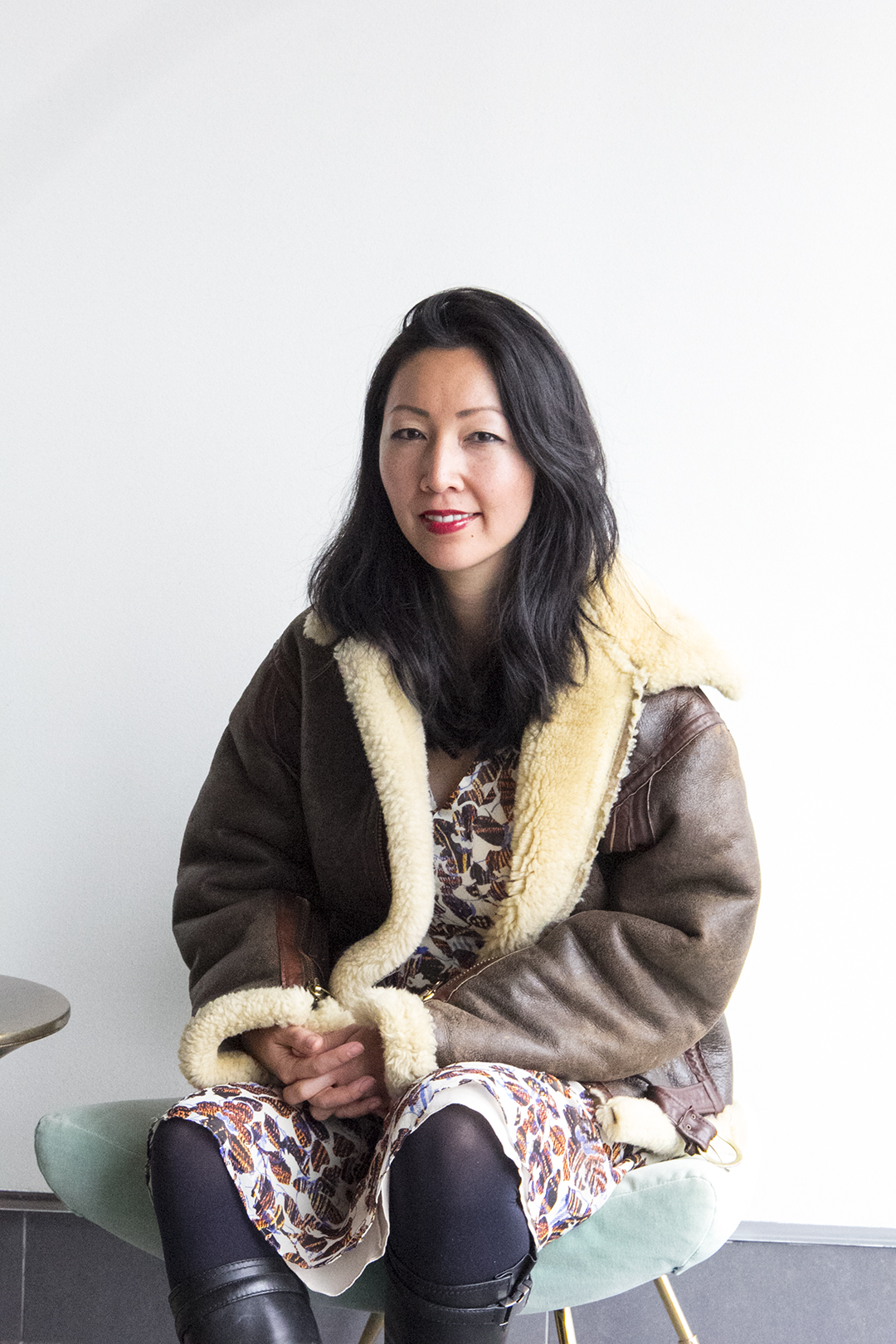 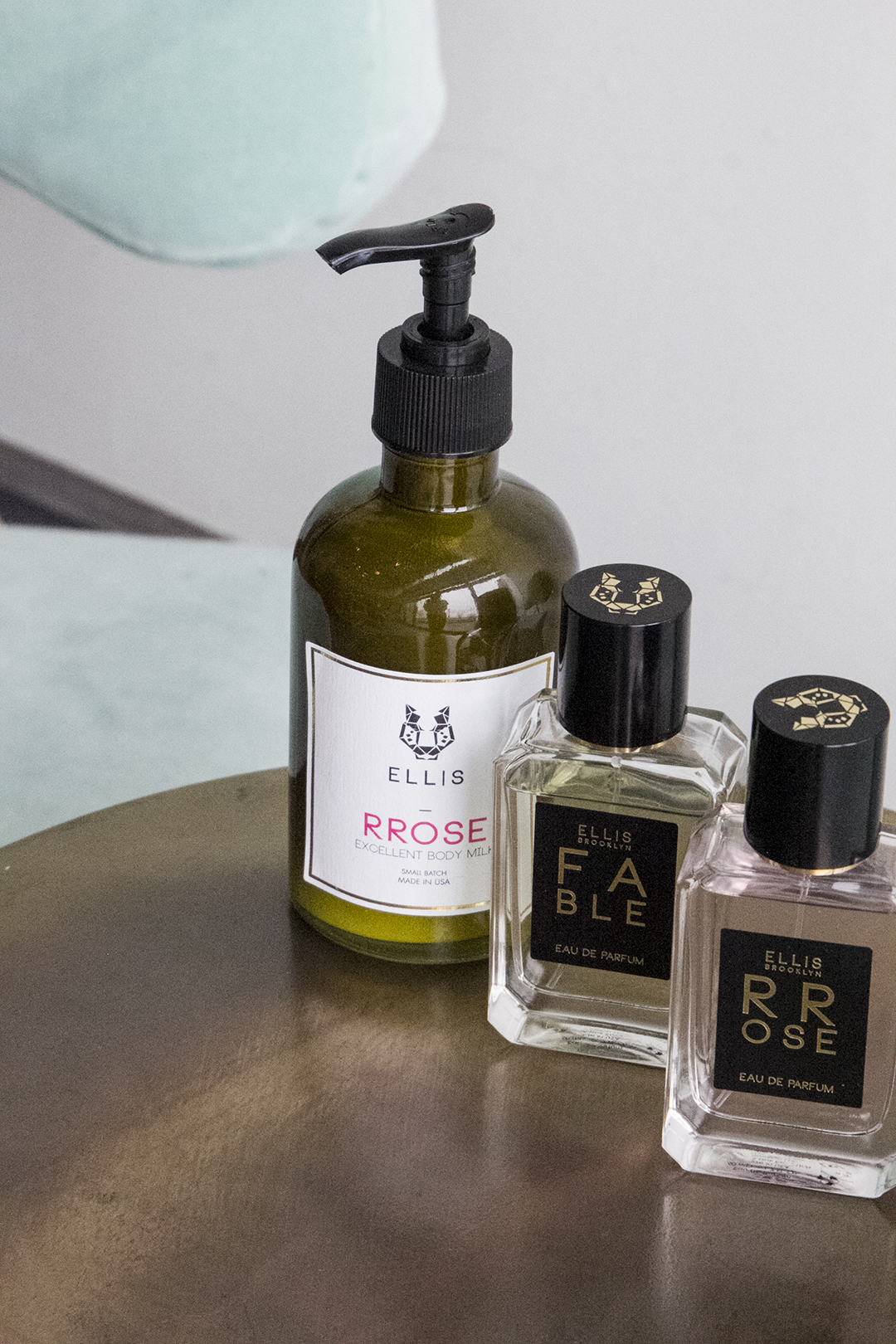 ON BALANCING ELLIS BROOKLYN WITH HER WRITING: It’s like putting out fires left and right! I do block out time in my calendar to write. With two little ones at home right now though, time is very precious. I wish I had some magical solution for balancing it all but it’s more me just feeling good for making it work somehow every day.

HOW HER NETWORK HAS HELPED IN EXPANDING THE BRAND: One of the many assets of being in New York is how very interconnected people are and how so many are generous with their contacts. I find if I just keep telling my Ellis Brooklyn story to friends both old and new, there’s this wonderful growing circle of contacts. You never know who you’ll meet and who that person might know. Even so, it was my husband, who works in ad sales, who really got me to tout my brand. It’s not second nature for me to constantly be talking up my projects. But I’ve found that people want to know and they even often want to help. In terms of suppliers, people in the beauty industry have been amazingly generous, too. Vicky Tsai of Tatcha connected me with a gift set packager. Jennifer Lacy Smith who works at Oribe connected me with my box manufacturer. Laura Slatkin of Nest introduced me to Sephora. The list goes on and I am so grateful to them!

GROWING PAINS: Things like dealing with logistics and cash flow are real day-to-day business problems. Also in the beauty world, product development from start to finish can often take a year, maybe more depending on what you’re working on so the cash crunch is real.

ON THE AREAS SHE’S STILL WORKING ON: I don’t have a huge Instagram following like many of my peers. I do understand that followings are important, but I also think so is actually living and enjoying life. Being an Instagram influencer means I have to constantly be on my phone. I don’t like to be so attached to the phone. I like live life less in pictures than in the moment. That said, it does make me insecure because our world today is so much about building a follower base and being able to communicate and engage with that base.

Want To Learn From The Pros? 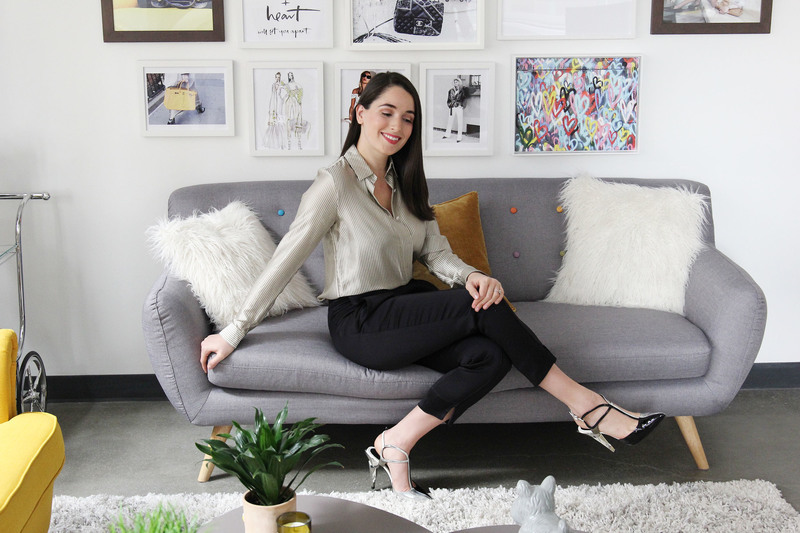 Subscribe to grab a round up of the top career & business advice from over 350 of our interviews with women making their mark.